44 replies to this topic

Samvel Nikoyan, an MP of the ruling Republican Party of Armenia (RPA),
commented on the Gyumri tragedy in an interview with Tert.am.

Armenia's society wants to know about the motives for and all the
details of the crime, which accounts for Armenian citizens' demand
that Armenia's law-enforcers conduct an investigation.

Asked whether the Gyumri tragedy could affect Armenian-Russian
relations in any way, Mr Nikoyan said:

"There are factors arousing concern, but I do not think it could cause
tension. The problem should be perceived correctly and when logical
solutions are found it cannot affect Armenian-Russian relations. Not
only Gyumri, but Armenia's society demands that, in conformity with an
Armenian-Russian agreement, Armenia's law-enforcers investigate the
crime committed in Armenia's territory, namely, the murder, and the
trial take place in Armenia. If the Russian side shows understanding
as well, the problem will be resolved. No tension or clashes would
have taken place. Armenia's society is just demanding justice and
information - the most important things. A whole family was murdered,
including a 2-year-old and a 6-month-old child. Society wants to
understand how a youth, a soldier, could commit such an atrocity. And
this demand cannot be viewed as an anti-Russian phenomenon."

wasn't going to post anything on Russia & Ukraine but..

Oct 5 2022
The Russian Double — Defeat and Decline
Written By: Emil Avdaliani
As Russia is losing in Ukraine, it is also being displaced in the South Caucasus

Russia may now be in an era of irreversible decline. That anyway is what the long-term trends indicate.

Russia’s once-vaunted military is being mauled in Ukraine. It will either lose outright, or remain to fight a hopeless war for years to come. Despite September’s rigged referendums, its attempt to legalize its seizure of Ukrainian territory not only generated derision but was swiftly challenged in the most profound way — by the Ukrainian armed forces liberating swaths of land from the Russian invader.

These defeats have reverberated wide and deep into Eurasia. In Central Asia, Kazakhstan, Russia’s critical link to the region, is worried about the Kremlin’s intentions. Its Russian-populated northern regions could easily turn into Kremlin’s next geopolitical adventure if the war in Ukraine ends with some semblance of Russian success. This encourages its leaders to play its Chinese card; Xi Jinping obliged during a visit on September 14, noting rather tartly that “we will continue to resolutely support Kazakhstan in protecting its independence, sovereignty, and territorial integrity.”

But perhaps the biggest changes are taking place in the South Caucasus, where Armenia and Azerbaijan, two long-time rivals, are adjusting to the new reality created by a wounded and diminished Russia even as they seek to navigate the continuing repercussions of the Second Nagorno-Karabakh war of 2020. Azerbaijan sees Russia’s preoccupation with Ukraine and sought to take the maximum advantage. Armenia, which was refused Russian military aid during the recent fighting, has been under fierce Azeri pressure to recognize its territorial integrity, thus de jure renouncing its hope that Nagorno-Karabakh might be a separate entity.

Negotiations between the two sides have been encouraged by the European Union (EU), but the signing of a peace treaty remains elusive and is likely to remain so for the foreseeable future. The EU lacks the clout to force it through, while Russia is not yet sufficiently enfeebled to be ignored. From this flows an ambiguity that is dangerous for South Caucasus states. As peace efforts stumble, Armenia and Azerbaijan are preparing for a new round of competition, and the possibility of more fighting.

Armenia was the loser in 2020 and it is still badly bruised by the defeat, has just announced a 47% military budget increase for next year. There is little detail on the systems it seeks and the total of $1.2bn is still dwarfed by Azerbaijan’s $2.6bn billion defense budget, yet the trajectory is clear. As Russia is unable to prevent future escalations in the South Caucasus, Armenia has to become more self-reliant in preparation for future clashes.

The Russian inability or unwillingness to influence events is also pushing Armenia to search for a new arms supplier. It has little choice given that arms deliveries from Russia to Armenia have been delayed by nearly a year — another indication of inadequate military industrial capacity.

So step forward India. The two countries have signed an agreement worth some $245m for the purchase of Indian artillery systems and anti-tank rockets. India’s involvement might be surprising to many, but the rivalry with Pakistan, which supports Azerbaijan (and has not even recognized Armenia’s existence) is now silently spilling over into the South Caucasus.

Moreover, Armenian analysts and even politicians are now more vocal in their criticism of Russia, emphasizing the need to reconsider Armenia’s basic strategy. The Russia of 2022 is not the Russia of the 1990s, when major treaties were agreed between the two countries. were signed. It is now increasingly clear to the Armenian leadership that a defeated Russia could be a serious liability. At the heart of this reassessment is the role of the Collective Security Treaty Organization (CSTO), which failed to intervene when Armenia was under threat, and the Russian military bases on Armenian soil. Both pillars of supposed Armenian security are now crumbling.

Quite apart from Russia’s current military weakness, deficiencies in Russian efforts are also related to the Kremlin’s disingenuousness in the South Caucasus. Chaos is what Russia feeds on. Manageable chaos is even better.

Russia’s influence was flagging even before its all-out invasion of Ukraine. Turkey’s entrance into the region’s affairs is a major factor, while the EU’s re-emergence as a negotiating force has also hit Russian prestige — every summit of Armenian-Azerbaijani leadership this year has been held under Brussels’ auspices and none took place in Moscow.

Russia is losing. It has increasingly fewer levers of influence even with its allies. And while Ukraine consumes all attention, the South Caucasus and Central Asia could be seen as a real gauge of how the Kremlin’s power is fading in the depths of Eurasia.

Emil Avdaliani is a professor at European University and the Director of Middle East Studies at the Georgian think-tank, Geocase.

Russia delivered strongly-worded statements after the Pashinyan-Aliyev meeting in Prague. Foreign Ministry spokeswoman Maria Zakharova said that some Western mediators “cannot even be called peace mediators.” She announced that Moscow had sent proposals to Yerevan and Baku to conclude a peace treaty, and stressed tht “[w]e are not engaged in some kind of special advertising activity, behind which there is nothing.”

The opinion of political scientist Suren Surenyants on the confrontation between Russia and the West in the context of the resolution of Armenian-Azerbaijani relations.

On October 6, Armenian Prime Minister Nikol Pashinyan and Azerbaijani President Ilham Aliyev held talks in Prague through the mediation of European Council President Charles Michel and French President Emmanuel Macron. Afterwrd a statement was adopted in which Azerbaijan and Armenia mutually recognized each other’s territorial integrity. Armenia agreed to the deployment of an EU civilian mission along the border with Azerbaijan.

“Western approaches to a peace agreement are not quite balanced”

During her latest briefing, Russian Foreign Ministry spokeswoman Maria Zakharova said that Moscow is providing comprehensive support for the normalization of relations between the two allied states, including the preparation of a peace treaty:

“Moscow deliveredcomprehensive proposals to Baku and Yerevan on concluding a peace treaty between Azerbaijan and Armenia.”

Special representative of the Russian Foreign Ministry, Igor Khovaev, according to Zakharova, visited the region in September to hold consultations on this issue.

Zakharova announced that Russia is engaged in practical work and talks only about what has already been done. Moreover, the Russian Federation does not consider it inappropriate to comment on the details of the negotiations, “taking into account the sensitivity of the subject matter of the peace treaty.”

In response to a question about how Russia views the prospect of a peace treaty between Armenia and Azerbaijan through the mediation of Brussels, Zakharova said that Russia is “against geopolitical intrigues that lead to a dangerous disruption of the situation.”

“We are always ready to support efforts that lead to tangible results, stabilization of the situation, and therefore we play an intermediary role. As for Western approaches to the peace agreement between Azerbaijan and Armenia, in our opinion they do not seem to be quite balanced. And, to be honest, I don’t even want to talk about the role of some Western mediators, because it’s impossible to call them peace mediators.”

In a public broadcast, the Prime Minister of Armenia touched upon almost all the problems important to the country and society, not avoiding painful topics 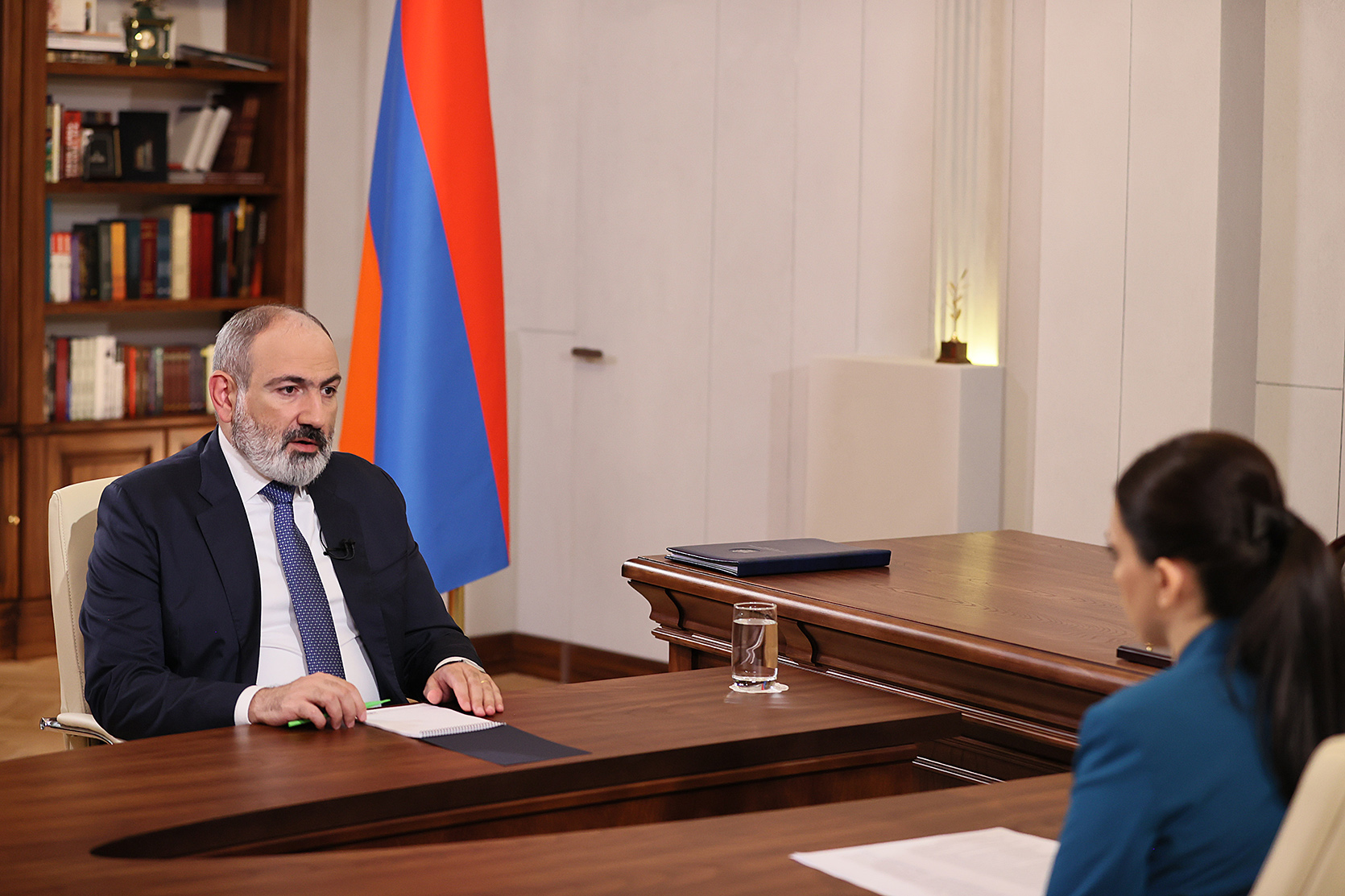 “They concerned Western mediation platforms – both the European Union and the United States. It is also obvious that Zakharova’s main target was the so-called EU civilian mission along the border between Armenia and Azerbaijan, about which there is a point in the Prague statement,” Surenyants told JAMnews.

According to the political scientist, in the context of the confrontation between Russia and the West, one should not have expected anything else. He believes that we will not see consolidated international efforts:

“Moscow proposes to regulate Armenian-Azerbaijani relations, but not to discuss the status of Nagorno-Karabakh for the time being. Western nations offer a comprehensive, comprehensive solution to Armenian-Azerbaijani relations, including the Nagorno-Karabakh problem. According to the calculations of Western partners, if this problem is solved, there will be no need for Russian peacekeepers anymore.”

The expert believes that there is indeed competition between intermediary platforms, which creates “new security risks”:

“If international efforts are not consolidated, then we can expect a clash of efforts of different powers and, accordingly, the loss of their effectiveness.”

According to Surenyants, Armenia is trying to maneuver, to take advantage of various opportunities, but it is necessary to be very careful so that the country does not find itself the “epicenter of a conflict between different geopolitical players”:

“Armenia should try to combine the interests of different players and harmonize them with our agenda.”

Surenyants is not sure if this will succeed. The success of the process is depends on the following circumstances:

“It is only obvious that in any case, no matter what mediation platform takes on the role of moderator of the negotiations, unpopular, non-standard, painful concessions await us,” Surenyants emphasized.

According to him, such concessions are “more than obvious” on the Nagorno-Karabakh issue, but there will be others:

“Problems may also arise in the process of delimitation and demarcation of the border. If the status quo of 1991 is taken as a basis, then the question of enclaves will also arise. In the end, there is no agreement on the issue of unblocking regional roads. Armenia needs to be very flexible in order to manage all these risks.”