The Answer Is Blowing in the Wind: A History of Hot Air


The Answer Is Blowing in the Wind: A History of Hot Air


The first hair dryer was invented in 1890 by the French stylist
Alexander F. Godefroy. The device was a large metal bonnet attached to
the chimney pipe of a gas stove, which a user then sat beneath.

In 1911, the Armenian-American inventor Gabriel Kazanjian received the
first patent for a hand-held hair dryer, and during the 1920s, early
metal portable models arrived on the market. Slow, heavy at around two
pounds and prone to overheating, there were multiple cases of
electrocution.

Seated devices continued to be popular in salons, with cubicle models
emerging that offered magazine stands, ashtrays and even speakers so
clients could listen to music as their hair was being set. Some women
keen for a similar effect at home were known to connect a hose to the
exhaust of their vacuum cleaners to try to style their hair.

Soft bonnet dryers were introduced into hairstyling salons. With
short, tight curls all the rage, a small box-shaped dryer attached by
a tube to a shower caplike plastic bonnet with holes blasted air
continuously and evenly all over the head.

The rigid-hood dryer -- a large, hard plastic bonnet -- arrived in
1951 and went on to become a mainstay of the salon market over the
next 30 years. While working on the same premise as the bonnet, it was
able to conduct a much higher wattage level, resulting in quicker,
tidier styles.

Portable hand-held hair dryers continued to attract large interest
thanks to the increased privacy and efficiency from using a device
within the home. Over time, plastic housings were developed, motors
made lighter and more powerful, and safety circuit interrupters were
incorporated to limit accident or injury.

By the 1970s, hair dryers had become a mass-market consumer product.
While the inner workings of most models have remained largely
unchanged since the earliest devices, external features have been
added, including diffuser, airflow concentrator and comb nozzle
attachments.

Many models have also become more compact. The portable hair dryers of
the 21st century could produce over 2,000 watts of heat.

The Dyson Supersonic, unveiled in April, is a first foray into the
world of beauty for a company known for fans and vacuum cleaners. The
Dyson hair dryer has its motor in the handle rather than the head, and
its inventors claim it to be quieter, safer and lighter than market
rivals.

Slide of the above info at
https://urldefense.p..._zDsKv7yHD4Q&e= 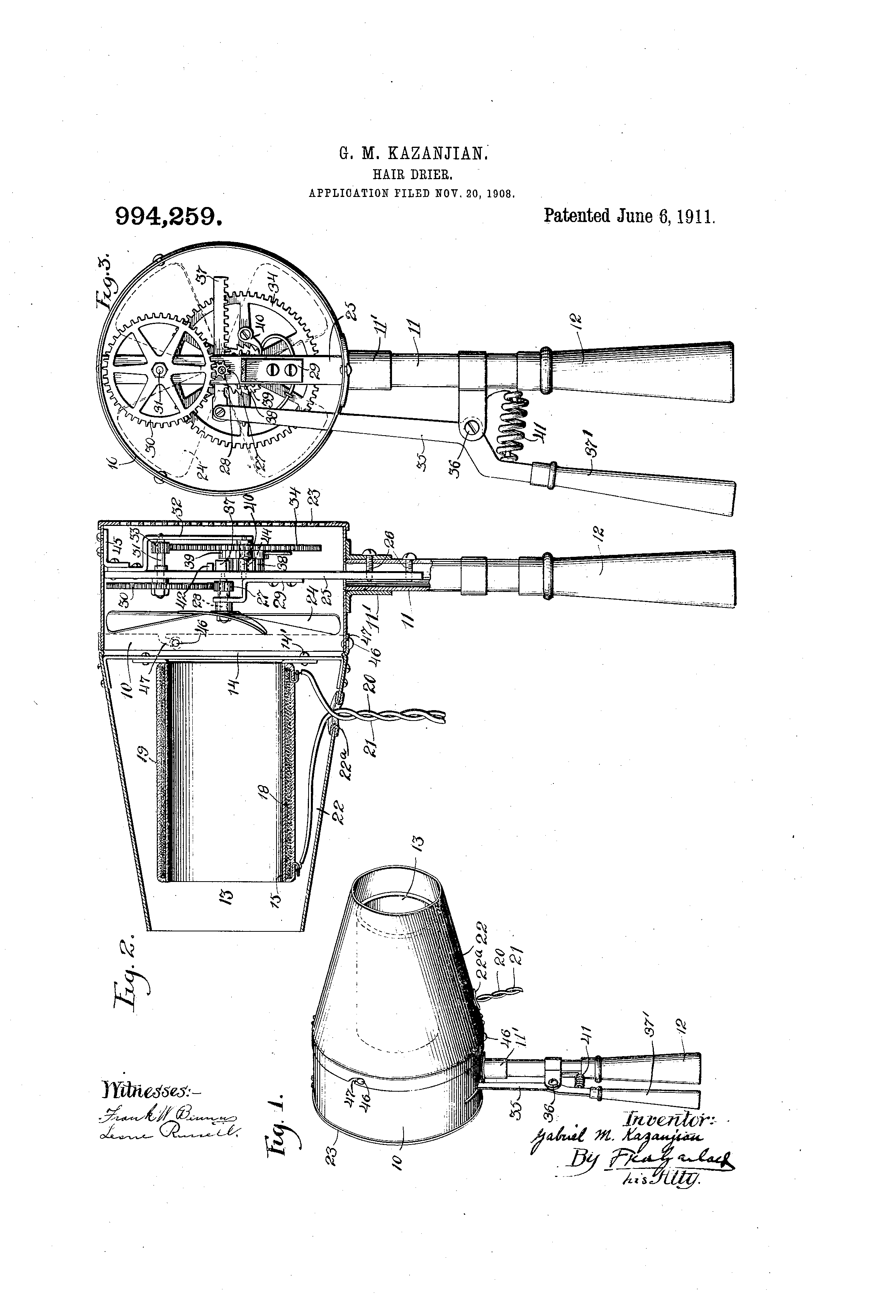 Very interesting! I owned a Salon in the 60ies, by than we were using Air Conditioned Driers with the motor in the base of the drier a couple feet below the plastic head piece. The dryer was fairly quiet, heat could be adjusted so that the air was as warm or cool as would be comfortable.

Thanks for posting the diagram for a registration.

Kazanjian~So our cousin invented this beauty,