YEREVAN, DECEMBER 3, ARMENPRESS: The official conference of the
International Astronomical Union entitled "Multichannel Observations
and Studies of the Active Galactic Nuclei" dedicated to Armenian great
astronomer Beniamin Margaryan's 100th anniversary, which will be held
in Armenia on October 7-11, 2013. As the Armenian Astronomical Society
informed "Armenpress" this information has been spread on December 1,
as a result of which the future participants will be registered and
present their works to be discussed and adopted by the Organizing
Committee of the conference.

It is expected that around 200 participants will arrive in Armenia
from different parts of the world. 18 astronomers from USA, Japan,
Great Britain, Germany, France, Italy, Ireland, Australia, Argentina
and Armenia are included in Scientific Organizing Committee. 38 of
invited speakers have already confirmed their participation.

IAU Conferences are the most prestigious events in the astronomical
world, where the most important astronomical problems are discussed and
usually are attended by the best specialists. In the conference, which
will be held in Armenia will be discussed active galactic nuclei (AGN)
multichannel observations made by the ground and space telescopes,
AGN structure and theoretical models, separate AGN and the issues of
their alteration, the activation phenomenon, interactions and future
large-scale projects of galaxies containing AGN, their surroundings,
AGN viewed in galaxy systems (multiple galaxies, groups and heaps).

ARMENIA AS ASTRONOMICAL SUPERPOWER AND REGIONAL CENTER OF ASTRONOMY: AN INTERVIEW WITH BYURAKAN OBSERVATORY DIRECTOR

In Armenia astronomy is quite developed and attracts international
interest, which is why the Byurakan Astrophysical Observatory after V.

Hambartsumyan of Armenian National Academy of Sciences was recognized
as a regional astronomical center by a decision of International
Astronomical Union, Director of Byurakan Observatory Hayk Harutyunyan
told Panorama.am.

The recognition of Byurakan Observatory as a regional astronomical
center will allow Armenian experts to organize workshops and courses,
invite foreign scholars and implement projects with the financial
assistance of International Astronomical Union , the director said
noting that the development level of astronomy in the given country
is also assessed when international scientific community declares a
country a regional astronomic center.

"On the whole, international scientific bodies and experts consider
Armenian astronomy quite developed - Armenia ranks 34th-35th in the
world by the development level of its astronomy, while our country
is in 130th-140th position by its population. Armenia is regarded
an astronomical superpower in this sense," the director of Byurakan
Observatory said.

Discussing the fact that a decision was made to draft a strategic
program and reform the management system of Byurakan Observatory after
it has received a new status, Hayk Harutyunyan said: "The breakup of
the Soviet Union negatively affected astronomy and we are trying to
gradually reach the former level. The main goal of the strategy is
to organize science in such a way that the existing opportunities
and human resources can be used most efficiently".

The director said that despite the current problems, Armenian astronomy
attracts plenty of interest from abroad, with approximately 30 foreign
specialists visiting Armenia every year. 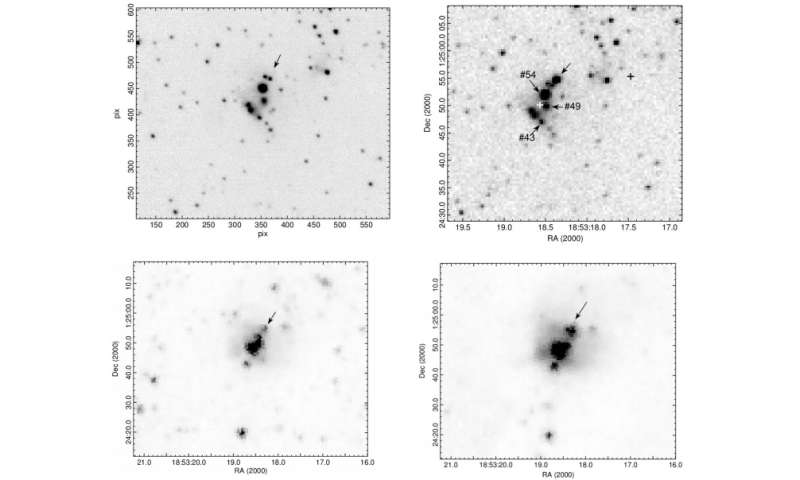 (Phys.org)—Astronomers from the Byurakan Astrophysical Observatory in Armenia have discovered a strong outburst of the embedded young stellar object (YSO) designated UKIDSS-J185318.36+012454.5. This newly detected event could provide important insights for the understanding of eruptive variability of young stars. The researchers presented their discovery in a paper published Dec. 30 on the arXiv preprint server.

UKIDSS-J185318.36+012454.5 is located in the vicinity of the IRAS 18507+0121 source and probably belongs to the massive star-forming region associated with GAL 034.4+00.23 HII region. The object is at least 5,000 light years away from the Earth and its neighborhood contains massive protostars with an age of about 100,000 years, as well as a low-mass stellar population approximately 1 million years old. The stellar object was classified as an intermediate mass YSO less than 100,000 years old.

Recently, a team of researchers led by Elena Nikoghosyan has combed through the data and images provided by the United Kingdom Infrared Telescope (UKIRT) in Hawaii to search for evidence of outbursts in star-forming regions. They used the archival infrared and submillimeter data from UKIRT Galactic Plane Survey (UKIDSS GPS) and found that an outburst occurred in UKIDSS-J185318.36+012454.5 in the period of 2004-2006.

According to the paper, the amplitude of brightness of the detected outburst is at least five mag. The object remained at this level of brightness until 2014.

The results of the research allowed the scientists to re-classify UKIDSS-J185318.36+012454.5 as an eruptive variable with mixed characteristics, namely a MNor-type object, and Nikoghosyan emphasized the significance of the study.

"Eruptions of pre-main sequence stellar objects are rare events, thus a new outburst is always noteworthy. And I think that the discovery of a new eruptive variable UKIDSS-J185318.36+012454.5 with a so strong outburst (delta K > 5 mag) was a big success," she said.

The authors of the paper also sought the most plausible explanation for eruptive variability of young stars. They noted that several physical mechanisms, such as rotation, cool or hot spots, accretion-driven wind and outflow can explain the near-infrared variability, but these mechanisms often produce short-term variability with amplitude that is not expected to exceed one mag in the K band.

"In our opinion, all of the proposed explanations of this phenomena to date (eruptive variability of young stars) do not explain it completely, most likely due to lack of information. With respect to this object, we can only assume that this outburst corresponds to the transition between two evolution stages: Class 0 (no optical and near-infrared emission) and Class I (generally optically obscured). But this is only an assumption," Nikoghosyan concluded.

The researchers now plan further observations of UKIDSS-J185318.36+012454.5. However, these studies could only be conducted in collaboration with scientists from other countries due to the fact that in Armenia, there is no opportunity to observe this object in the infrared range.

Abstract
Aims. We report the discovery of a strong outburst of the embedded young stellar object (YSO), namely UKIDSS-J185318.36+012454.5, located in the star-forming region associated with IRAS 18507+0121 source and GAL 034.4+00.23 HII region. Methods. Using the archival photometric data and images we determined the amplitude and the epoch of the outburst, as well as the evolution stage and the basic parameters of the object. Results. According to the near and mid-infrared colors and spectral energy distribution, we classify the object as an intermediate-mass young stellar object (YSO) with Class 0/I evolution stage. The outburst occurred in the period of 2004-2006. The amplitude of brightness is as least Ks = 5.0 mag. The summation of the photometric and spectral data does not allow to classify UKIDSS-J185318.36+012454.5 as FUor or EXor. We can consider it as an eruptive variable with mixed characteristics or MNor type object.