Acclaimed singer and guitarist Dickran Gobalian known as  Leon Redbone has died. Redbone's family confirmed the musician's death on Thursday in a statement shared on his official website, The Associated Press reported.

"It is with heavy hearts we announce that early this morning, May 30th 2019, Leon Redbone crossed the delta for that beautiful shore at the age of 127. He departed our world with his guitar, his trusty companion Rover, and a simple tip of his hat,” the statement read, according to the Associated Press release.

To note, his career got a boost in the early 1970s when Bob Dylan met him at the Mariposa Folk Festival in Ontario, Canada, and praised his performance. Dylan said that if he ever started a label, he would have signed Redbone.

Throughout his career, Redbone made appearances on "Saturday Night Live" and "The Tonight Show Starring Johnny Carson." He also sang theme songs for such works as "Mr. Belvedere" and "Harry & The Hendersons."

In addition, he also voiced Leon the Snowman character in Will Ferrell’s beloved 2003 movie "Elf," and did a duet with the movie's female lead, Zooey Deschanel, for “Baby, It’s Cold Outside.”

To note, according to a Toronto Star report in the 1980s, Leon was once known as Dickran Gobalian, and he came to Canada from Cyprus in the mid-1960s. Biographical research published in 2019 corroborated his birth name, and stated that his family was of Armenian origin. His parents lived in Jerusalem, but moved in 1948 to Nicosia, Cyprus, where Redbone was born. By 1961, the family had moved to London, England, and by 1965 to Toronto. 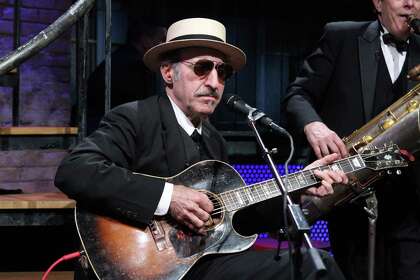 Leon Redbone, who burst onto the pop music scene in the mid-1970s with a startlingly throwback singing style and a look to go with it, favoring songs from bygone eras drolly delivered, died Thursday in Bucks County, Pa. He was 69.

His family announced the death on his website. A specific cause of death was not given, but Redbone had retired from performing in 2015 because of ill health.

Toting an acoustic guitar, his face generally half-hidden by a Panama hat and dark glasses, Redbone channeled performers and songwriters from ragtime, delta blues, Tin Pan Alley and more, material not generally heard by the rock generation. His music defied easy categorization; he was sometimes described as a jazz singer, other times as a folk or pop or blues artist. He sang in a deep, gravelly voice that combined singing and mumbling, but he also deployed a falsetto of sorts on occasion.

He began turning up on the coffeehouse circuit in Toronto in the 1960s and developed a cult following. He broke through to a larger audience in late 1975 with his first album, “On the Track,” which included songs like “My Walking Stick,” by Irving Berlin, and “Lazybones,” by Hoagy Carmichael and Johnny Mercer. His sound was unique for the era, as the New York Times noted in a January 1976 article about the record and its producer, Joel Dorn:

“Redbone, who in his nightclub appearances plays the role of a grinning, almost catatonic folkie, will undoubtedly confound many, but Dorn has certainly given him his due in a completely ungimmicked musical setting.”

The album earned Redbone two appearances on “Saturday Night Live” in 1976, during the show’s first season. Fifteen more albums followed, most recently “Flying By” in 2014. Redbone also sang the theme songs for the television series “Mr. Belvedere” and “Harry and the Hendersons,” was heard on various commercials, and provided the voice of an animated snowman in the 2003 movie “Elf.”

His stage persona remained consistent for his entire career, as did his determination to reveal little about his personal life or background. The announcement of his death said he “crossed the delta for that beautiful shore at the age of 127.”

He was actually born on Aug. 26, 1949, in Cyprus. An authoritative article in the Oxford American this year said his parents had relocated there from the Armenian Quarter of Jerusalem after the new Israeli government seized their property. Redbone’s birth name, the article said, was Dickran Gobalian, although he always remained elusive about that and other details of his life.

“When he broke onto the scene in the early ’70s, no one knew where the hell he came from, and he liked it that way,” Loudon Wainwright III, who was paired with him on bills back then and again more recently, said by email. “Somebody once saw a Canadian passport, I think, but Redbone refused to be pinned down.”

By the mid-1960s Redbone was living in Toronto, and, self-taught on the guitar, he began performing at folk clubs and coffeehouses. A pivotal moment came in 1972, when Bob Dylan noticed him at the Mariposa Folk Festival in Ontario and was so impressed that he talked of producing his first album. That didn’t happen, but Dylan did commend Redbone to Rolling Stone in a 1974 interview.

“Leon interests me,” he said. “I’ve heard he’s anywhere from 25 to 60, I’ve been this close” — Dylan here held his hands a foot and a half apart — “and I can’t tell. But you gotta see him. He does old Jimmie Rodgers, then turns around and does a Robert Johnson.”

Redbone was by that time playing at larger halls and festivals and was being paired on bills with Tom Rush, John Prine, Wainwright and others.

“Mr. Redbone does amusing, funky old blues songs with a sly gentleness that almost amounts to parody,” John Rockwell wrote in the Times in 1974, reviewing a performance at the Bottom Line in Manhattan, “but so lovingly and exactly that he can only invite affection.”

Redbone, who lived in New Hope, Pa., is survived by his wife, Beryl Handler, who acted as his manager; two daughters, Blake and Ashley; and three grandchildren.

In a 1996 interview with the Las Vegas Sun, Redbone spoke of what he was trying to achieve with his performances and his eclectic song selections.

“It’s painting something, it’s you creating a mood,” he said. “You can create a mood anywhere you want, with colors, noise, yelling and screaming. I myself prefer serenity, calm, peace and quiet.”