KHACHKAR: A CORNERSTONE OF ARMENIAN IDENTITY

KHACHKAR: A CORNERSTONE OF ARMENIAN IDENTITY

Theculturetrip.com has published an article about the Armenian
khachkar (cross-stone), presenting its history and role in the life
of Armenians. In the article entitled "The Khachkar: A Cornerstone of
Armenian Identity" the website says 'The cross is arguably the most
familiar symbol of Christianity, but nowhere is this iconography as
crucial or culture-entrenched as it is in Armenia.'

"Wherever you go, thousands of khachkars, or cross-stones, pervade
the mountainous conscience of the world's oldest Christian nation,
providing a rare glimpse into the art of spiritual expression,"
the site says. Below is the full article.

With all these attributions, it is little wonder then that the cross
could serve as a champion symbol of Armenian national identity and
union. Starting from the 4th century, the conversion of Armenians,
and the instatement of Christianity (and by extension, the Armenian
Apostolic Church) as a state religion in AD 301 issued a new era of
national consciousness. This burgeoning perception of Armenia as an
entity distinct from the surrounding Zoroastrians was consolidated
by several factors of the time: the invention of the Armenian
alphabet, the effacement of the former pagan temples, and Gregory
the Illuminator's evangelical reign as the first head of the Armenian
Church. The latter (now Armenia's patron saint) particularly catalysed
the movement, and in an effort to distinguish and preserve the Armenian
identity, ordered the creation of the first khachkar.

Upon initial inspection, the khachkar bears resemblance to other forms
of Christian art, namely the Celtic High Cross and the Lithuanian
KryÅ¾dirbystÄ-. A type of relief sculpture, it features a variety
of floral, vegetative, and geometric motifs, as well as tableaus of
famous biblical scenes. Beautiful, yes-- but in order to understand
how a medieval stone became so charged with the Armenian spirit,
a lesson in iconology is needed.

The cross was not always a well esteemed symbol; it once represented
the basest form of execution, reserved for the disgraceful. The
resurrection of Jesus however, and the persecution of the early
Armenian Christians, transformed the cross into an image of
soteriological victory: an emblem of triumph over the mortal vale.

At the same time, mountain worship was prevalent. The mountain, as a
biblical location, connoted austerity, reverence, and closeness with
God. Moses, for example, communicated with God through the Burning
Bush on Mount Sinai. For the early Armenians, there was no better way
to claim this new Christian heritage than through the mountains, with
which their land was replete (Armenia's ancient territory included
several biblical mounts). Gradually, the mountain worship evolved
into a stone stela that could be conveniently erected near the home
or church.

When Gregory the Illuminator envisioned the khachkar, he believed
it had the power to impart holiness into the air by sanctifying
the immediate vicinity. Because religious and secular agendas were
intrinsically at odds, the Cross, by virtue of the khachkar, was seen
as a mediator between the Christian and the pagan. In turn, it began
to assume various ecclesial functions- as gravestone, hallowed effigy,
intervening spirit, talisman, and commemorative shrine of events,
among others. Thus it was only fitting that the khachkar turned into
a uniquely Armenian fixture in graveyards, monasteries, cathedrals,
residences, roadsides, and eventually, everywhere.

>From an artistic perspective, the creative medium of rock boasts
a powerful statement. Indeed, the rock has enjoyed several iconic
references in the Bible. Jesus in a famous discourse quotes, 'The stone
the builders rejected has become the capstone' and at another time,
tells Peter (petra being the Latin word for rock) that '...on this
rock I build my church....' Such strong imagery was necessary for the
Armenian Church's survival; qualities such as permanence, stability
and grounded faith were perpetuated by the physical three-dimensional
embodiment of the cross-stone. Of course, practicality would also
play a huge role. Armenia, with its vast mountain ranges and dormant
volcanoes, would have no trouble sourcing the slate and tuff, both
relatively workable, for construction purposes. In a region prone
to earthquakes, man-made structures would have to prove sturdy. The
rock, as a substrate of spiritual expression, signified the eternal
and the infinite, amidst an unpredictable future.

But the substrate, no matter how remarkable, is nothing without
the craftsman. In the case of Armenians, anyone with religious and
moral conviction could erect a khachkar. Moreover, khachkars were
commissioned for a number of social, spiritual, or individual reasons
- anything from the planting of a garden to victory in war. Some were
dedicated to saints, but all were meant as a source of pride for the
artist and the patron, the country, the church, and ultimately, God.

Today, that tradition continues. Using nothing but chisels and hammers,
local craftsmen fashion out intricate designs in stone. Many of these
master artisans, like Varazad Hambartsumyan, channel the spirits of
their ancestors. 'This is something our people have done for about
2000 years.' Indeed, modern khachkars continue to feature ancient
symbols and motifs such as the sun, the cross, and the wheel of
eternity. Others depict saints and biblical imagery such as the dove
and the grapevine. While there are many similarities, no two khachkars
are ever alike, adding to their unique character. As Hambartsumyan
shares, 'Khachkar is a prayer, khachkar is a sacrifice, khachkar is
our ancestors, khachkar is our identity.'

Connecting both the past and the present, the khachkar continues to
watch over the world's oldest Christian nation, making this unique
art form a true Armenian cornerstone.

(Photo by Narek Harutyunyan, Smithsonian)
By Jackie Flanagan Pangelinan, Smithsonian Center for Folklife and Cultural Heritage
smithsonian.com
an hour ago


Two brothers set about chiseling slabs of milky gray limestone, each using a hammer bluntly pounding the end of a long, thin, and sharp instrument. Stone dust falls away, revealing delicate channels underneath. They work silently, only stopping to light a cigarette, as their carvings form intricate symbols representing the tree of life, eternity, vines and other traditional patterns. All of their carvings are on limestone, the same material from the same local quarry in Khachik village used to build the fabled Noravank monastery—another popular motif.

Just over sixty miles from the Armenian capital of Yerevan, Noravank (literally, “new monastery”) has inspired stone carvers and artisans for centuries from its hilltop perch. The early Armenian architect Momik designed this site in the thirteenth century, and since then, artisans have carved almost every surface to honor bishops, princes and the Christian faith. Where the road leading to the monastery meets the main highway, there is the entrance of another tourist draw: the Areni-1 cave, one of the world’s earliest known wine production facilities.

Outside this entrance, the Ghazaryan brothers work. Here, they mindfully carve and teach others to do likewise. This is their life’s work; they create work year-round in preparation for the main tourist season of March through November. This is where their work is made and the only place it is sold.

Growing up in nearby Yeghegnadzor, Ruben and Karen’s father enjoyed carving stone as a hobby. Only in the last seven years have the brothers dedicated themselves to mastering the craft at the suggestion of a local priest. Their tools consist of the same hammer and chisel used when Armenian stone carving began; however, they learned by the modern method of studying online videos. Like all master artisans, they have refined their skills through constant practice.

“We work mostly together, concentrating on the form and what it will become, always inspired by Noravank like Momik,” Ruben explains.

What are their goals for the future?

“To teach others, maybe even our children, here someday,” Karen muses.

It was a clear and quiet autumn morning when we visited Ruben and Karen during our fieldwork visit for this summer’s Folklife Festival Marketplace. All of the colors of the season—auburns, vibrant yellows, and russet gold—were interrupted only by the blue tarp covering their roadside stall drawing quiet attention to their work. We left them there, in the blue sheen of their tarp, as they continued the idea of paying tribute to their own stories and inspirations, the buildings, landscape and events that surround them, with hammer, chisel, and local limestone. 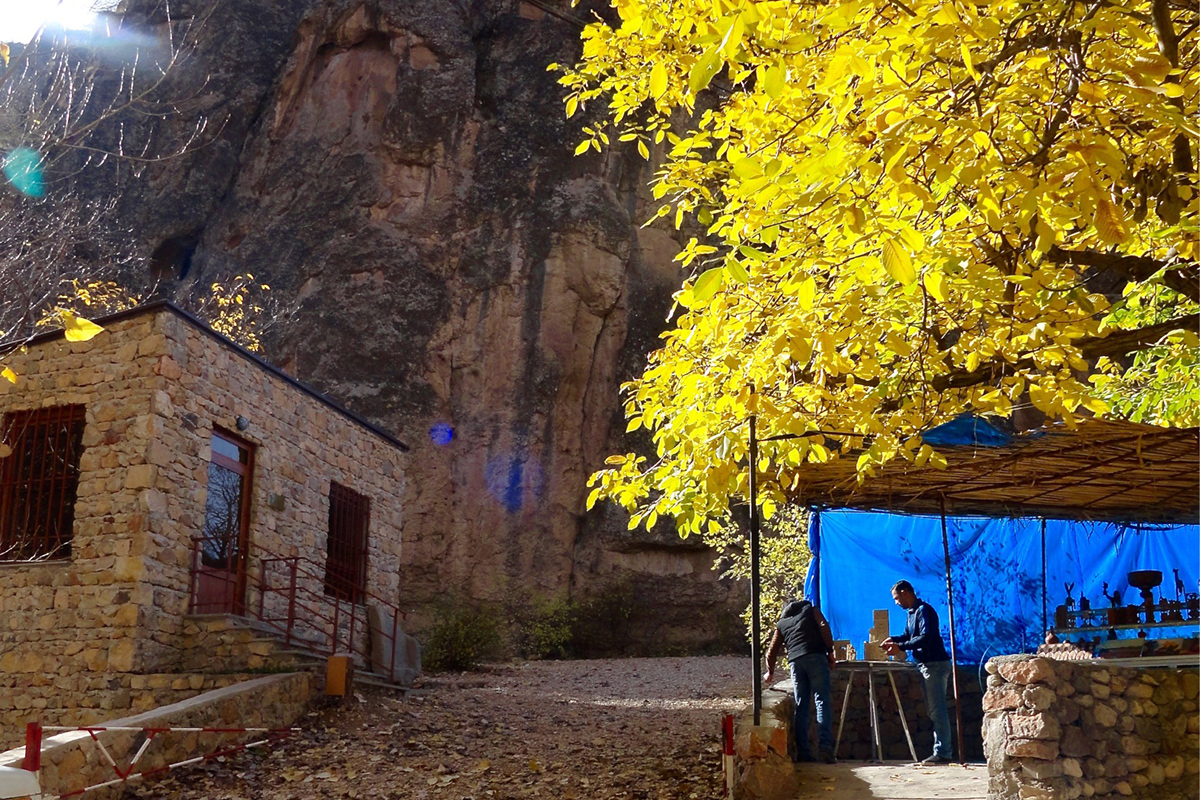 Visit the 2018 Smithsonian Folklife Festival June 27 to July 8 to meet Ruben and Karen Ghazaryan and learn more about their stone carving. Their work will be for sale—for the first time outside of their stall—in theFestival Marketplace located in front of the National Museum of American History during the Festival.

Jackie Flanagan Pangelinan is the Marketplace and artisan engagement manager for the Smithsonian Folklife Festival. Khachkars (cross stones) dating back to the 11-13th centuries has been discovered in Drmbon community of Martakert, Artsakh.

The cross stones were found near the chapel and cemetery of Drmbon by the head of Martakert Regional Service, Avetik Aghabekyan, Artsakhpress reported.

No other details were immediately available.