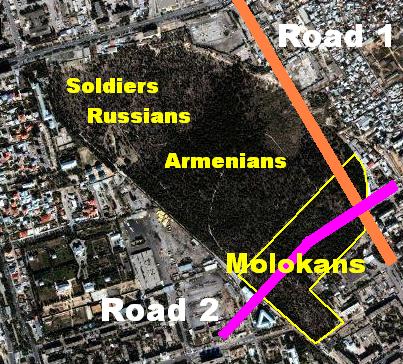 After — Late 2007 Update: May 2, 2008 — Extensive cemetery damage due to construction of a 6-lane divided highway is shown in the current aerial photo from Google Earth, about 6 months old. The photos show about one-fourth to one-third of the Molokan cemetery is destroyed (10-15 acres), an area 2 to 3 times the size of the used section of the Los Angeles Jumper-Molokan cemetery on Slauson Ave. in the City of Commerce, California. Click on images to enlarge.

Demolition for a second road planned across the center of the Molokan cemetery may have begun, but is not shown on these photos. On January 16, 2008 Today.AZ reported: "... transfer of graves from the second part of the cemetery started on December 15 of 2007."

I am uncertain as to which "Aliev" street or streets are to be built next, because there are two streets called Aliev which end at the cemetery — "T. Aliyev Str." and "H. Aliyev Str." Both could be extended.

Update: May 2, 2008 — Extensive cemetery damage due to construction of a 6-lane divided highway is shown in the current aerial photo. 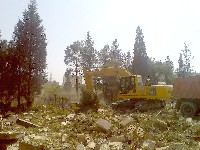