425 replies to this topic

In Grigoryan's words, normalizing relations with Turkey should be separated from relations with Azerbaijan and take place without any preconditions that has been the case during the past authorities.

Speaking of the Artsakh issue, Grigoryan noted that the OSCE Mink Group remains the main and the only platform for resolving the issue. The  NSC Secretary reminded that all three co-chairmen had called for resumption of the talks under the auspices of the Minsk Group to discuss the status.

"The Artsakh issue is not resolved and its status is yet to be addressed. We see its settlement under the auspices of the OSCE Minsk Group," said Grigoryan, adding the conflict has always been about the right to self-determination but not a territorial dispute.

UK - Sept 30 2021
Is Armenia-Turkey Détente Ahead?
Leaders of both countries have repeatedly hinted that direct talks on a rapprochement could soon begin.

Armenian analysts have responded with caution to apparent overtures between Yerevan and Ankara over a possible détente between the two countries.

Both Armenian Prime Minister Nikol Pashinyan and Turkish President Recep Tayyip Erdoğan have repeatedly hinted in recent weeks that they were prepared to begin talks on repairing bilateral relations.

The two countries have never established diplomatic ties and their shared border has been closed since the early 1990s. Relations further deteriorated last year over the 44-day Nagorony Karabakh war, in which Turkish military support for Azerbaijan may have played a decisive role in its victory.

However, last month Erdogan said that Turkey was willing to open talks towards normalising ties if Armenia also “declares its readiness to move in this direction”. He has also raised the prospect of creating a regional platform that would help establish links from Turkey's Igdir to Azerbaijan, possibly via a rail route through Armenia.

In turn, Pashinyan told a September 8 cabinet meeting said that Erdogan’s remarks presented “an opportunity to discuss normalisation of Armenia-Turkey relations and de-blockade the Armenia-Turkey railroad and [other] communications. We are ready for such discussions”.

Pashinyan added that global players including Russia, US, EU, China and India would welcome such a move.

Oppositions figures have expressed scepticism about Pashinyan’s approach. Lawmaker Hayk Mamijanyan, of the Pativ Unem (I Have Honour) faction, said that Ankara’s lack of extensive preconditions made him question whether Turkey might have already have received some kind of assurances. Critics have previously accused Pashinyan of covert negotiations to end the Karabakh war, in which Azerbaijan took control of extensive territory previously controlled by Armenia.

Mamijanyan said that Pashinyan should “seek to dispel such doubts, or else [it means] he once again has decided to strike some sort of a backdoor deal”.

He said that progress could not be made without separating Armenia’ relations with Turkey from those with Azerbaijan.

“We want Turkey to realise – and we ourselves need to do it too – that Azerbaijan and Turkey are totally different entities and individual players in the region, whose interests are not necessarily identical,” Aghajanyan said.

Eric Hacopian, a contributor to Civilnet media, noted that successive governments in Armenia had supported the idea of normalising relations with Turkey without achieving any kind of breakthrough. He said that Baku’s opposition may play a part in this stalemate.

“Azerbaijan thinks they can impose their will or get the worst for us-best possible for them deal and any kind of a Turkish rapprochement with Armenia actually would weaken the case,” Hacopian said.

He added, however, that domestic Turkish considerations might derail any fresh efforts to start talks, given that the National Movement Party (MHP) - part of Turkey’s ruling coalition - would likely oppose better relations with Armenia.

As a result, Erdogan would be reluctant to press forward with any dialogue as he will need MHP support in the upcoming 2023 elections.

“His [Erdogan’s] words are meaningless, only his actions matter,” Hacopian continued. “I do not see anything changing on the primary relationship between those two countries until the fall of the Erdogan regime.”

However, historian Hrant Ter-Abrahamyan said that the very fact of holding talks with Turkey was in itself significant, even though it was important to have realistic expectations about what could be achieved.

“There is a lot to talk about with Turkey and it is expected that Armenian society cannot have a positive attitude towards that state – that is quite natural for understandable reasons – but we need to be pragmatic,” he said. “If Armenia and Turkey have something to give and receive, if they expect something from us – and it is through a dialogue that such a thing can be revealed – then we should follow that path. We needed to have it done earlier.”

Ara Sahakyan of the opposition Hayrenik (Homeland) party, said that although Armenian-Turkish relations needed to be slowly normalised, the internal politics of both countries did not currently support this.

“It needs to be done slowly, stage by stage,” he said. “The authorities need to understand that succeeding in laying the foundations of Armenian-Turkish relations would be an achievement by itself. But it will take more than one generation to achieve that. Such matters are not resolved by an [Armenian] government which has 53 per cent of votes, but rather by large coalitions.”

This publication was prepared under the "Amplify, Verify, Engage (AVE) Project" implemented with the financial support of the Foreign Ministry of Norway. 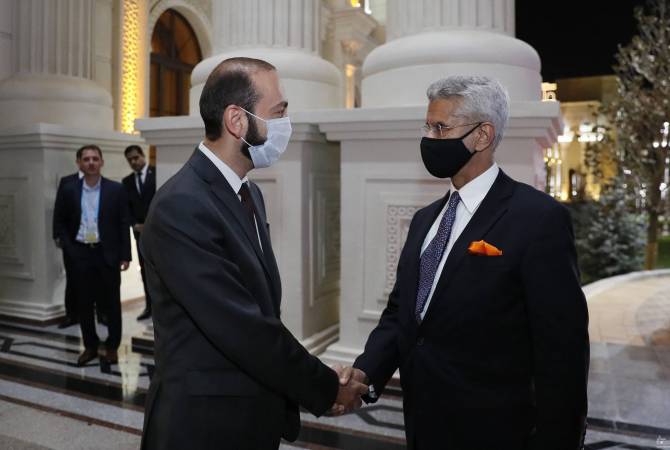 Prime Minister Nikol Pashinyan and Speaker of Parliament Alen Simonyan will also have meetings with the Indian FM.

Editing and Translating by Stepan Kocharyan 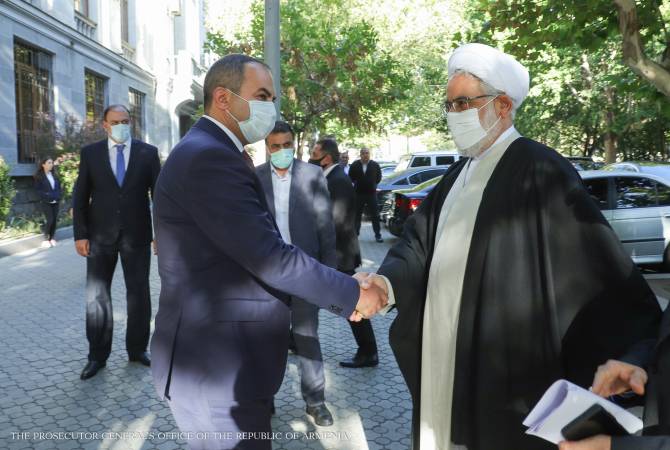 The Iranian Prosecutor General last visited Armenia 8 years ago. The visit kicked off with expanded-format negotiations.

As ARMENPRESS was informed from the press service of the Prosecutor General’s Office, welcoming the guest and his delegation, Artur Davtyan first thanked his counterpart for accepting the invitation and visiting Armenia despite the difficulties caused by the coronavirus pandemic.

“Iran is a reliable friend of Armenia, a good neighbor, our relations have a history of hundreds of years. Iran is also a very important trade partner of Armenia, we also have a very active Armenian community in Iran. Iran is home to a considerable Armenian cultural heritage, which enjoys the caring attitude of the Iranian authorities, which I was convinced of during my visit to Tehran in November, 2018.

The high level of relations between Armenia and Iran is evidenced by the numerous meetings of the leaders of our states and the multilayered nature of the issues discussed, while the cooperation between the General Prosecutor's Offices of our states is of continuous nature”, the Prosecutor General of Armenia said.

Iran  Mohammad Jafar Montazeri  thanked for the warm reception and expressed confidence that mutual visits contribute to the further deepening of cooperation between the Prosecutor’s Offices and law enforcment agencies. He stressed the significant contribution of Iranian-Armenians in the social, political and cultural life of Iran, emphasizing that due to the existing mutual trust, no serious problems arise in bilateral relations.

During the meeting issues related to the cooepration between the Prosecutor’s Offices of the two countries were discussed.

"Thank PM @NikolPashinyan of Armenia for receiving me today. Conveyed greetings of PM @narendramodi. Meeting brought out the many convergences and shared outlook of our two countries. We agreed to develop a broad agenda of practical cooperation that is to our mutual benefit," Jaishankar tweeted.
Jaishankar also visited the Matenadaran library. In a series of Tweets, Jaishankar said that "Armenia and India's connect is visible in the Matenadaran library in Yerevan."

"The Armenia -India connect so visible in the Matenadaran library in Yerevan. First Armenian newspaper and constitution that were published in Madras(Chennai)," Jaishankar tweeted.

"Also at Matenadaran library, a copy of the Mahabharata in Sanskrit," he added.

"Ajanta in Armenia. Paintings of the caves by noted Armenian Artist Sarkis Khachaturian at National Gallery of Armenia in Yerevan," he wrote in another tweet.
Earlier today, External Affairs Minister held a meeting with his Armenian counterpart Ararat Mirzoyan in Yerevan where they agreed on enhancing trade, education and cultural exchanges between the two countries. Jaishankar also met the president of the Armenian National Assembly Alen Simonyan.
Jaishankar arrived in Yerevan on Tuesday and was welcomed by the Foreign Minister of Armenia Mirzoyan. He is the first Indian External Affairs Minister to visit Armenia.
Jaishankar on Sunday embarked on a three-nation tour of Kyrgyzstan, Kazakhstan and Armenia. His visit is scheduled to conclude today. (ANI)
https://www.sify.com...pTceejhadb.html 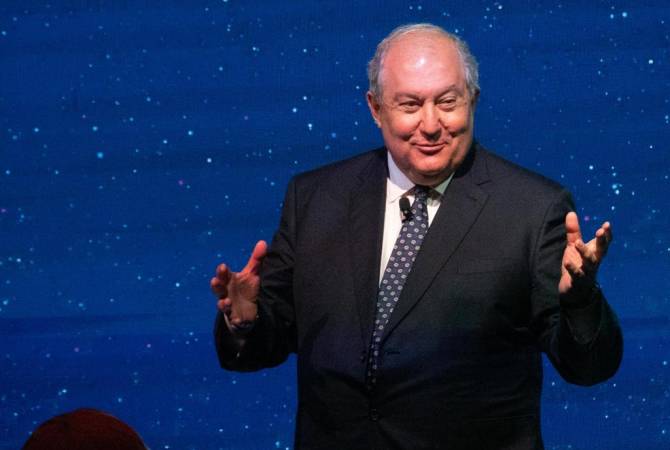 YEREVAN, OCTOBER 14, ARMENPRESS. President of Armenia Armen Sarkissian participated in an event in Rome dedicated to the 70th anniversary of the foundation of Elettronica Group, a famous Italian company engaged in providing services in the fields of defense, cyber-security.

“Elettronica Group is one of the world’s leading companies providing services in the fields of defense, cyber-security and new technologies. The company uses huge resources for conducting research and development programs and has offices in different parts of the world. During the event Armen Sarkissian delivered welcoming remarks, stating that Armenia is interested in the cooperation with Elettronica Group in areas of cyber-security, mathematics and artificial intelligence. The President said that Armenia has a great development potential in these areas, adding that his dream is to make Armenia one of the best places of artificial intelligence in the world”, the President’s Office said in a statement.

The event was also attended by top officials of Italy, including the foreign minister, the minister of defense, the French economy minister and many others.