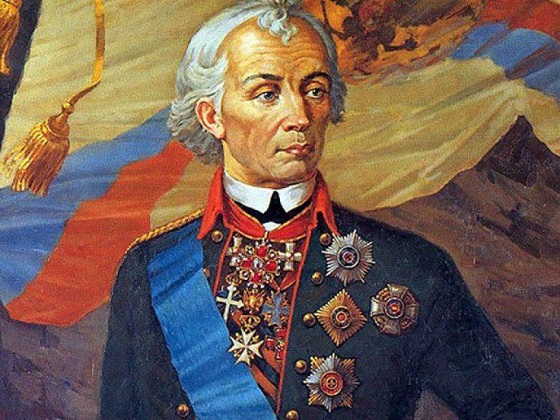 He was a sickly child. His father, a military man, assumed the feeble boy was destined to become a civil servant. But the boy had a surprise for his father: through exercise and deliberate exposure to hardship, he overcame his ailments. At seventeen, he enrolled in the Russian Army. No one could have imagined that one day the narrow-shouldered teenager would become the greatest “Russian” general—a military leader who would expand Russia’s borders, force European nations to respect Russian military might, and repeatedly defeat the Ottoman armies. He also put an end to Emilyan Pugachov’s rebellion which threatened Catherine the Great’s reign. The rebellion was immortalized by Alexander Pushkin in his novel The Captain’s Daughter.

The young man’s name was Alexander Suvorov. He was born in Moscow in 1730. His mother was Avdotya Manukov (Hripsime Manukian) whose family had recently moved from Astrakhan, north of the Caspian Sea, to Moscow. The family’s roots went back to Artsakh, in southern Armenia. Suvorov’s father spoke fluent Armenian. 1,000 Armenian Generals and Admirals by Karekin Ghazarian and Dikran Hayazn (Authoritative Publications, Yerevan, 2009, says Suvorov Sr.’s first name (Vasili) had been Russified from the Armenian Barsegh. Barsegh and Vasili derive from the Greek “Basil,” meaning king.

The first time Suvorov saw the battle was during the Seven Years’ War (1762). He was promoted to colonel as a result of his battlefield successes during that war. In the next thirty-plus years, he fought in sixty-three battles. He didn’t lose a single battle when he was in command. Russian military scholars consider him the best general in Russian history. Suvorov fought in Crimea, the Caucasus, Poland, Prussia, Switzerland, Austria, the Balkans, and in Italy. He captured Warsaw to put an end to the Polish uprising and lead the Austro-Russian Army to capture Milan and force the French Army to withdraw from Italy’s biggest northern city. In the same war, he made a strategic withdrawal from the Swiss Alps with a minimum loss of his soldiers. In recognition of his achievement, Catherine the Great honored him with even exalted titles. Suvorov’s most spectacular victories were against the Ottoman Army. In a typical battle, his 25,000 soldiers routed 100,000 Ottoman soldiers within a few hours, losing only 500 fighters. Although he was usually outnumbered in his battles against the Ottomans, he was always victorious.

Throughout his career, he was piled with honors—Russian and foreign. He became Count of Rynik for winning the battle bearing that name. The Emperor of Austria made him Count of the Holy Roman Empire for his victories over the French. He became Prince of Italy and the last Generalissimo of the Russian Empire. He was a national hero.

Although delicate-looking, Suvorov was a soldier’s soldier. During campaigns he lived like a private, eating with his men and even sleeping on straw. On the battlefield, he stood in the most exposed spot because he wanted to share the same dangers as his men. He was wounded six times. He made sure his army was well supplied. His soldiers adored him. They also appreciated Suvorov’s disdain for the “palace generals” and his mockery of the empress’ “yes” men.

He wrote articles about military affairs and his book “The Science of Victory” was, for many decades, a textbook taught at military schools. He said the secret of battlefield victory was speed, mobility, the accuracy of gunfire, and the effective use of the bayonet as well as detailed planning and careful strategy. The essence of his military philosophy was: “Train hard; fight easy” meaning that a well-trained soldier would have an easier time on the battlefield.

During his lifetime and later, villages, military academies, and museums were dedicated to him, in addition to statues and monuments. His victories were commemorated on the Day of Military Honor (December 24). Pushkin, Mikhail Lermontov, and Leo Tolstoy mentioned him in their writings. One of his soldiers wrote a glowing song about him.

General Suvorov organized the resettlement of 30,000 Armenians from Crimea to a new city (Nor Nakhichevan) in the Don steppes built specially for them. To liberate Armenia from Turkish rule, the Armenian general asked Empress Catherine for permission to attack the Ottoman Empire from the east but the empress rejected Gen. Suvorov’s request.

Although there’s no doubt Suvorov was Armenian, some Russian military  scholars claim the general’s father was a Swede and his mother’s last name (Manukov) doesn’t mean it was derived from “Manukian.” The Finns have also jumped into the controversy and claim Suvorov was a Finn. Their evidence? Suvorov could speak Finnish. The evidence that Suvorov was Armenian is overwhelming.

Exhibit 1: “Manukov” must have derived from the Armenian “Manukian” because “Manuk” is not Russian. As well, the word doesn’t occur in the languages of the various ethnic groups which made up the Russian Empire. In the 17th and 18th century many leading Armenians (nobility, military leaders) Russified their names becoming Melikov, Melkonov, Gazarov, Arakelov, Lazarev, Sumpadov, Atabegov, Yepremov, Krikorov, Hakhverdov, Tolukhanov, Tumanov, Baratov, Salakov, Antranigov…

Exhibit 5: He was the link between the Armenian community in Russia and the Russian government.

Exhibit 6: He petitioned the empress to allow him to annex Turkish-occupied Armenia.

Exhibit 7: He is buried in the Armenian cemetery of St. Petersburg.

Exhibit 8: He attended the opening, along with Prince Potemkin, of the first Armenian church of St. Petersburg.

Exhibit 10. Prince Potemkin, the right-hand man and secret husband of the empress, referred to him as “the man from the Caucasus.”

Exhibit 11: When the Republic of Artsakh built its first military academy, it named it Alexander Suvorov-Valerian Madatov (Gen. RoGeneralissimo Suvorov’s prominence in the Russian Army was not a rare occurrence for an Armenian. From the 18th century to the Bolshevik Revolution, more than 200 Armenians served as senior officers in the Russian Army. Among them were Count Mikhail Kudusov who led the Russian army against Napoleon at the Battles of Borodino and Berezina. Kudusov’s mother was Armenian and descended from the Beghlimishev Armenian clan, according to 1,000 Armenian Generals and Admirals. Kudusov learned soldiering from Suvarov. Gen. Arkady Suvorov, the son of Alexander, also fought against Napoleon and later continued his father’s tradition of pushing back the Ottoman Army. In all, ten descendants of Alexander Suvorov became generals in the Russian Army in the 19th century.