Court to Rule on Collection of Looted Artifacts

Court to Rule on Turkish Dealer’s Collection of Looted Artifacts

MUNICH, Germany (Cyprus Mail)—A German court is set to issue a final decision on the fate of 85 artifacts stolen from Turkish occupied areas of Cyprus, including fragments of painted church walls, an Armenian gospel manuscript, and some 40 prehistoric antiques, the Cyprus Mail reports.

The Court of Appeal of Munich is expected to issue its final decision in relation to some of those items found in the possession of a Turkish dealer, Aydin Dikmen. A total of 173 stolen artifacts found in Αydin Dikmen`s posession in Munich were repatriated to Cyprus last October.

On Wednesday, a hearing took place in the Court of Appeal in Munich, where the German judge proposed an out of court settlement by the 13th of February, 2015; otherwise, the Court will issue its final decision by March 16, 2015.

Bishop Porphyrios of Neapolis said that the Church of Cyprus and the Law Office of the Republic of Cyprus will try to reach an amicable settlement with the other party provided that “the settlement is reasonable and will allow the repatriation of all Cypriot treasures”.

Turkish art smuggler Aydin Dikmen had his headquarters in Munich and channeled the loot taken from the occupied areas through Turkey to the rest of the world. One of the biggest cases of illicit trading in antiquities involving Aydin Dikmen was the plundering of the wall paintings from the church of Agios Euphemianus and the 6th century wall mosaics from the Church of Panagia Kanakaria in the occupied areas of Cyprus.

In October and November 1997 the German Police raided apartments maintained by the Turkish dealer in Munich. The number of works of art they uncovered was astonishing: treasures were found from about fifty looted churches in Turkish-occupied Cyprus.

The records kept by the Turkish illicit dealer in antiquities have been lodged as exhibits at the Bavarian Court. The detailed way in which he kept his records is unprecedented: photographs and sketches prior to the theft of the mosaics and wall paintings, during their removal and after, as well as copies of the mosaics intended to be sold as originals in the illicit antiques trade.

The uncontrolled situation in the Turkish-occupied area of Cyprus after the Turkish invasion in 1974 has fostered the development of a network of dealers in illicit antiquities whose aim was to sell out the cultural heritage of Cyprus. With the encouragement and help of the Turkish army, the trade in illicit antiquities has brought great profit to those involved, and Cypriot treasures already adorn private collections in a number of countries including Turkey, Russia, Switzerland, Holland and the UK, and even as far as the US, Australia and Japan.

More than 500 churches situated in the areas under Turkish occupation since 1974 have been destroyed, plundered and looted or turned into stables, warehouses, restaurants and hotels. For this the Cyprus government and church have repeatedly protested to the UN, the World Council of Churches, and many other international and religious organizations.

Savages will always be savages, no matter how much they are exposed to civilization.

NICOSIA — The Church of Cyprus has announced that 34 treasures that were stolen from the island’s Turkish-occupied areas, have been returned to Cyprus.

The relics were returned after a German Court of Appeals issued its final decision on the fate of the remaining 85 treasures stolen by a Turkish art smuggler after the Turkish invasion of the island in 1974.

The treasures, including fragments of church wall paintings, icons, a manuscript of an Armenian gospel and 40 prehistoric antiquities, were found in 1997 in the possession of Turkish dealer in illicit antiquities Aydin Dikmen in apartments he maintained in Munich.

Among the artifacts, 24 are Byzantine relics and some prehistoric antiquities coming mostly from the collection of Chr. Chatziprodromou, from Ayios Epiktitos Church. Among the Byzantine relics there are three pairs of bema doors (Monastery of Antiphonitis Christ, Virgin Mary Monastery in Kantara), wall paintings from the Monastery of Antiphonitis Christ, the church of Agia Solomoni in Coma tou Yialou and the Monastery of Panagia Apsinthiotissa in Sychari. Also the treasures include a hand written manuscript of 17th century (omilario) from the Monastery of the Panagia Trooditissa, and the hand written gospel of the Armenian community of Cyprus stolen during the Turkish mutiny in 1963.

More than 500 churches situated in the areas under Turkish occupation since 1974 have been destroyed, plundered and looted or turned into stables, warehouses, restaurants and hotels. The Cyprus government and the church have repeatedly protested to the UN, the World Council of Churches and many other international and religious organisations.

Antique Armenian silver belt is offered for sale in one of the largest Turkish shopping websites.

The announcement says that the precious antique belt was made by Armenians. The belt was estimated at $ 120,000. 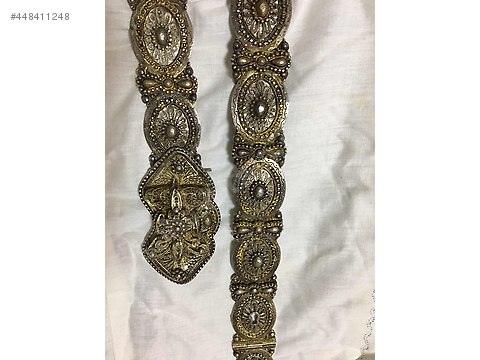