At 21, this aerospace engineering student, former refugee has created 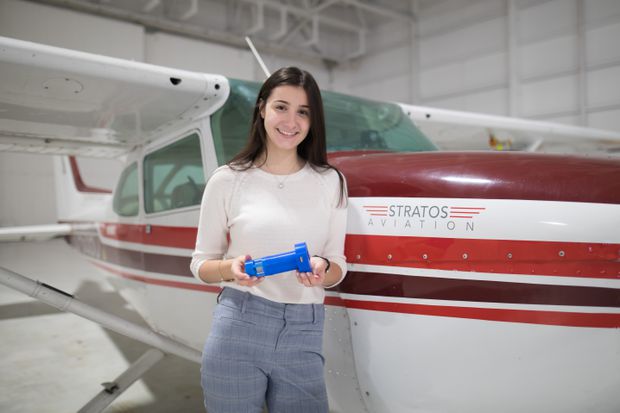 The Globe & Mail, Canada
Jan 4 2019
At 21, this aerospace engineering student, former refugee has created her first invention
LES PERREAUX
Shoushi Bakarian, an aerospace engineering student at Concordia University, poses for a photograph with a ventilation device that she redesigned for Cessna Aircraft, at Stratos Aviation in Montreal on Oct. 30, 2018. Bakarian arrived from Syria in 2016.
This is part of Stepping Up, a series introducing Canadians to their country’s new sources of inspiration and leadership.
The distance from Aleppo to the lab at Montreal’s Trudeau airport where a young engineer-in-training is perfecting her first invention is 8,580 kilometres, but Shoushi Bakarian’s trajectory might better be measured in light speed.
Three years ago, Ms. Bakarian was sitting in Lebanon, part of a family of four Syrian refugees facing an uncertain future with hope of making a new start in Canada. Fast-forward those 36 months: Ms. Bakarian is in her third year of aerospace engineering at Montreal’s Concordia University. She has learned her fourth language, French – in addition to English, Arabic and Armenian. She’s got two part-time jobs with promising prospects in her field: one in the parts department at Bombardier Aerospace and another at Stratos Aviation, a small aviation and flight simulation firm. There, she’s co-created her first invention in the lab she’s building. Oh, and she leads a Scout troop where she hopes to influence her young charges.
She’s 21. “I want to reach girls and tell them they don’t have to limit themselves to traditional jobs, like teachers. Especially for girls from my community, they have a very limited idea of what’s out there,” Ms. Bakarian says. “I want to become an example.”
On a recent late fall day, Ms. Bakarian tinkers with the tiny generator fan blades of her latest accomplishment: The Ventus, a 5-volt accessory charger for Cessna airplanes that runs off the aircraft’s air vents and as an added bonus cools the air by compressing it. The simple blue tube prototype seems likely to become a must-have accessory for pilots who rely on tablets and smartphones for aviation computation but fly aircraft that were mostly built long before the smartphone era.
“I like clean energy, solar power, wind power, so we developed it further to add on the charger idea,” she says. “I spent my summer designing, drawing and testing until it worked.”
Naor Cohen, the owner of Stratos Aviation, hired Ms. Bakarian within days of meeting her during an outreach program for women in aviation about a year ago. Ms. Bakarian started out as an instructor on the company’s flight simulators. One day he shared an idea he had to improve cooling small Cessna cabins by using a Venturi tube to compress and cool the air. He invited her to set up a lab with computers and 3-D printers and she ran with it.
“I guess she must sleep very little,” Mr. Cohen says. “We’ve never seen her as an employee, and more as a partner in the team. She’s free to come whenever stuff needs to be done. Right now, she’s concentrating mainly on the lab. We want to put that imagination and creativity to work more.”
Ms. Bakarian arrived in Canada on Christmas Eve, 2015, with her father, Antaranik, her mother, Ani, and her now-24-year-old sister, Meghri. The daughters had high school diplomas earned during the Syrian civil war with rockets flying overhead and bombs bursting not far from their Armenian school in Aleppo.
Small details come back to Ms. Bakarian as she remembers the time. “Our school was in the firing line, so we had to study in a kindergarten in these tiny little chairs,” she recalls. “I always make jokes about it, but it’s not funny.”
By 2015, the battle for Aleppo had settled into a stalemate and her family was stuck. “In Grade 10, the big bombs started, by Grade 11, we were without electricity or running water or internet. Some people started to leave but we didn’t know how to get out of Aleppo. We didn’t know who was on the road waiting to kidnap us. … Once the missiles started falling, we didn’t know where they were coming from or where they’d land.”
A turning point came when her mother needed surgery that had to be performed in Lebanon. The medical issue combined with mounting violence forced the family to make a move. They spent a year in Lebanon while she recovered. Her parents concluded the family would have limited education and work opportunities in that country. That’s when Canada opened the doors to Syrian refugees.
In those early Canadian winter days, the family enrolled in French classes while all four of them set about finding work. Ms. Bakarian got hired at McDonald’s, a job she kept as she enrolled at Concordia, which helped her family survive while her parents found work in the garment industry. It was a step down from her father’s previous job managing a tools warehouse. Meghri, meanwhile, is specializing in child studies at Concordia.
Ms. Bakarian is grateful for the sacrifices her parents made, but she made some, too. She was almost crushed by workload as a first-year university student who was working 30 hours a week at her fast food job. “I was physically, emotionally and mentally exhausted,” she says. “But now I’m making up for it. My family is okay now, and it’s easier.”
Arpi Hamalian, an education professor emerita at Concordia University, took the younger Bakarian women under her wing when they showed up at an orientation in early 2016. “They were looking a little lost,” Dr. Hamalian recalls now, but it didn’t take long for them to get on track. “Shoushi, well both girls really, know exactly who they are and where they are going. They are unbelievably talented, focused and team-oriented. There aren’t many like them.”
https://www.theglobe...4odfXRpHvJfPFu0

Good for her~ isn't she beautiful ~ her folks are smiling ```