Theres only one logical reason for this weird space phenomenon: alien

There’s only one logical reason for this weird space phenomenon: aliens No, seriously.
Michael Hiscock - Oct 15
The Kepler Space Telescope captures many stunning images of deep space, but something that crossed in front of its lens recently is leaving scientists absolutely baffled.

They’re calling it KIC 8462852, which is a fancy name for an extremely unusual star. What makes it strange is that the amount of light ol’ KIC emits dips and grows stronger from time to time. Normally, this kind of occurrence could signify the existence of a planet, slowly revolving around the star and casting a shadow. But this light pattern wasn’t like others that had been observed.

“We’d never seen anything like this star,” Tabetha Boyajian, a postdoc at Yale University, told The Atlantic. “It was really weird. We thought it might be bad data or movement on the spacecraft, but everything checked out.”

Instead, they found that the patterns suggest that there’s a big mass of something circling the star. First researchers thought the star might just be young, as they tend to have more debris circling them before they mature. But KIC 8462852 fits the description of an older star, so that can’t be right.

Intrigued, Boyajian eventually wrote a paper on other possible explanations for the star’s behaviour, but it only included “natural scenarios.” When she sent her data to fellow astronomer Jason Wright from Penn State University, however, Wright’s jaw almost hit the floor.

“When [Boyajian] showed me the data, I was fascinated by how crazy it looked,” Wright said. “Aliens should always be the very last hypothesis you consider, but this looked like something you would expect an alien civilization to build.”

Wright believes whatever massive object is circling the star could be a “swarm of megastructures” designed to capture energy from it. For what it’s worth, Boyajian also believes aliens could be a plausible explanation, according to the Washington Post.

But before you go and tell all your friends we’ve found aliens, keep in mind this is still just a hypothesis. Wright cautioned Slate that people looking over the new findings should “approach [them] skeptically.”

That said, however, it’s a pretty strong hypothesis. Whatever is causing the wonky light show on KIC 8462852 is about half the size of the star (which means it would have to be absolutely gigantic). The blips of flickering light the star emits, meanwhile, don’t seem to follow any pattern, while the actual amount of light lost or gained each time is both significant and random as well.

Whatever the case, scientists are sure of one thing: Something strange is going on with KIC 8462852. 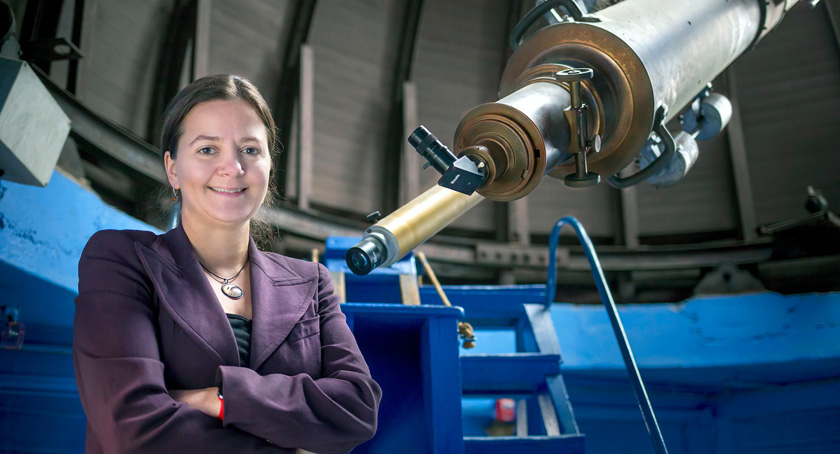 Something massive, with roughly 1,000 times the area of Earth, is blocking the light coming from a distant star known as KIC 8462852, and nobody is quite sure what it is. As astronomer Tabetha Boyajian investigated this perplexing celestial object

(PeopleofAr) – The 2015 publication of an enigmatic star made huge waves in the media. People quickly started to speculate of a possible “Alien Megastructure” that is blocking the view of the star KIC 8462852 colloquially known as “Tabby’s Star”or “Boyajian’s Star”. Bizarrely enough, however, this is not outside of possibility.

“We’d have to rewrite astronomy’s textbooks… This could be the biggest story of the past 500 years…” – said America’s famous theoretical physicist Michio Kaku.

The lead scientist responsible for decoding its signature from Kepler’s data in 2015 and authoring the discovery paper is the Armenian-American astronomer Dr. Tabetha Boyajian (assistant professor of astrophysics at Louisiana State University), in whose honor the star has been named. Boyajian serves today as a postdoc with the Yale Exoplanet group, whose research is assisted by the Planet Hunters – a citizen science group that combs data from the NASA Kepler Space Mission for evidence of exoplanets and other unusual interstellar activity. Her Ted talk in 2016 has been viewed for over 2,6 million times online.

So, what is this structure you might ask? Well to be precise it is still very much unknown what it really is. The only thing they do know is that something massive, with roughly 1,000 times the area of Earth, is blocking the light coming from a distant star. And that object is of an irregular shape, it’s not circular like a planet for example. Dr. Boyajian has described various hypothesis in her paper including collisions of asteroids, planets crashing into each other, irregular clouds of dust surrounding planets or a swarm of comets. But an “alien megastructure” is not outside of possibility, since nothing concrete has been discovered yet that could prove or disprove any of these theories. In fact since the last month Tabby’s Star is at it again, displaying huge irregularities by dimming and shining again. Space.com (May 19, 2017) describes it as follows:

The perplexing cosmic object known as “Boyajian’s star” is once again exhibiting a mysterious pattern of dimming and brightening that scientists have tried to explain with hypotheses ranging from swarms of comets to alien megastructures.

Dr. Boyajian is quite active on twitter encouraging her team of Planet Hunters – a citizen science group, to remain alert in the coming months. Hopefully someday soon this mystery will be resolved, but until then we’ll have to do with speculation.

Watch the following video for a quick overview and explanation.