ANCA-San Francisco Bay Area Chapter Condemns “Emerging Pattern of Hate Crimes”
The Board of Trustees of the St. Gregory Armenian Apostolic Church of San Francisco announced on Thursday that around 4 a.m. the building adjacent to the church was set ablaze by arsonists.

“The building housed Vasbouragan Hall, as well as offices for St. Gregory Armenian Church and various organizations. The San Francisco Fire Department responded immediately, however, the building has suffered a great loss,” said the church board of trustees.

“The Church Board of Trustees and community leaders are on site assessing the damage and working closely with San Francisco Fire and Police Departments in their investigation. We will provide more updates to the community as they become available,” added the board. 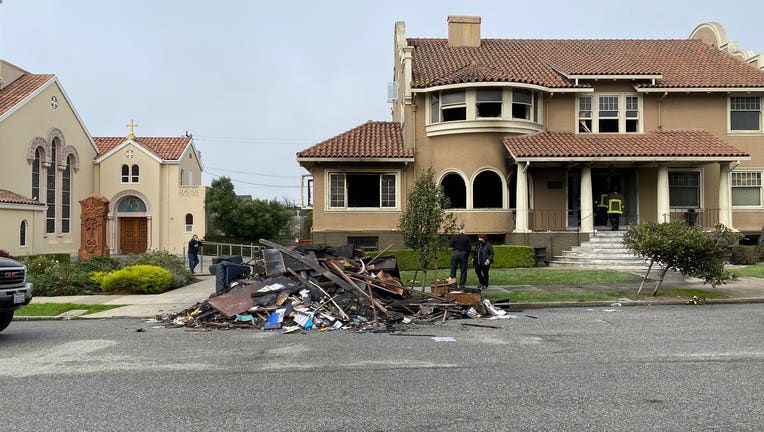 SAN FRANCISCO, Calif. - Arson is suspected in an early morning fire at a community center at the St. Gregory Armenian Church in San Francisco.

— V. Rev. Fr. Smpad Saboundjian Rostom Aintablian, Chairman
This is not the first time the church has been targeted. In August, surveillance video caught suspects vandalizing the KZV Armenian School on Brotherhood Way. The San Francisco District Attorney considers the vandalism to be a hate crime.
https://www.ktvu.com...n-san-francisco

A historic Armenian church in San Francisco suffered heavy damage in a fire that police suspect was set by arsonists and may have been a hate crime. 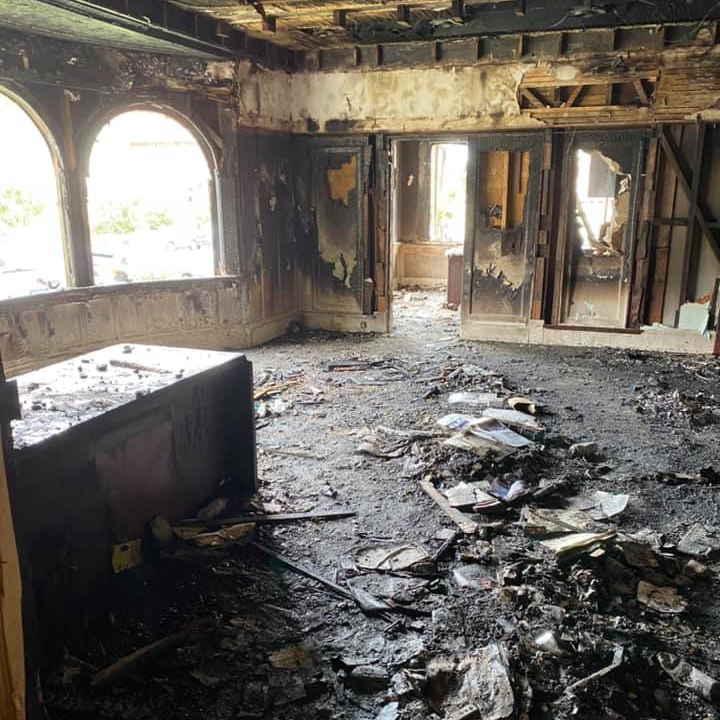 A historic Armenian church in San Francisco was halfway destroyed by a fire that police suspect was set ablaze by arsonists.

Firefighters responded to the blaze just after 4 a.m., according to NBC Bay Area, and were able to extinguish the fire.

But the building sustain extensive damage in the building adjacent to the main church, with two floors of the four-story church gutted.

“The building housed Vasbouragan Hall, as well as offices for St. Gregory Armenian Church and various organizations,” the church board of trustees said in a statement told ABC 7. “The San Francisco Fire Department responded immediately, however, the building has suffered a great loss.”

St. Gregory has been the primary place of worship for many Armenians in the Bay Area dating back to its first service in November 1957. The church also has long ties to Fresno.

And in more recent years, the Holy Trinity Armenia Apostolic Church in Fresno would partner with St. Gregory for events, including young adult spiritual trips.

Armenian community leaders told ABC7 the fire was set in three separate locations in the building: Sunday School classrooms, the church office and in the Hamazkayin Library.

SFGate said church leaders believe this could be related to the vandalism that happened at San Francisco’s Armenian School Krouzian-Zekarian-Vasbouragan in July. The school walls were vandalized with graffiti that conveyed anti-Armenian messages.

Investigators have classified the vandalism as a hate crime and the suspects in that case remain at large, police told NBC Bay Area.

BREAKING NEWS: San Francisco KZV Armenian School’s Sign Was Shot At Over The Weekend.
➖➖➖
DEVELOPING STORY: Two months after the Krouzian-Zekarian-Vasbouragan Armenian School was vandalized and days after the Armenian Center adjacent to the St. Gregory Armenian Church was subject to arson, the sign of the KZV Armenian school was shot at over the weekend.
The San Francisco Police Department is investigating incidents that occurred at a school located on the 800 block of Brotherhood Way and at a church located on the unit block of Commonwealth Avenue. The SFPD is investigating these incidents as hate crimes. The SFPD has taken steps to increase the safety and security of the community and for the physical sites however, we ask that the community remain alert and report anything suspicious to the police. Investigators are actively working to identify those responsible for the crimes and to place them under arrest, reports the San Francisco Police Department.
Officers were patrolling the KZV Armenian School at 825 Brotherhood Way at around 2:25 a.m. Saturday morning when someone fired a bullet that damaged the school’s sign, according to police. No one was injured by the gunfire.
The officers were assigned to guard the school after the campus was tagged with anti-Armenian graffiti in July and a church building on Commonwealth Avenue near the Richmond District caught fire in an act of arson last Thursday.
The officers immediately searched for the source of the gunshots, but no suspects were located. During the search, officers located a damaged sign in front of the school, which appeared to be caused by a bullet, but no injuries were reported.
“We will not tolerate intimidation,” U.S. Rep. Jackie Speier, who is of Armenian descent, tweeted in response to the first two incidents. “Love will triumph over hatred. Hope will defeat fear. Those responsible will be held accountable.”
Per San Francisco Police Department & SF Examiner

A recent fire at an Armenian church is now one of three incidents levied against the city’s Armenian community over the past two months that police are investigating as hate crimes.

The San Francisco Police Department’s Arson Task Force is investigating the fire that burned the parish office adjacent to the St. Gregory Armenian Apostolic Church in Laurel Heights on Sept. 17 as a hate crime, officials said this week.

The other two incidents are tied to the KZV Armenian School in the Parcmerced neighborhood.

On Sept. 19, two days after the fire, police officers heard gunshots outside the school and discovered bullet damage on a sign out front. The school was previously vandalized with hateful graffiti in July.

The series of what appears to be anti-Armenian crimes has been deeply troubling to the Bay Area’s tight-knit Armenian community.

Public officials including Gov. Gavin Newsom, Speaker Nancy Pelosi, Rep. Adam Schiff, D-Burbank, and Rep. Jackie Speier, D-San Mateo, who is of Armenian descent herself, have condemned the violence against the community in recent days.

This is an outrage.

The Armenian community of San Francisco woke up today to an arson at their church.

There is no room for this cowardly, hateful, criminal conduct in San Francisco. We stand with the Armenian community against hate!https://t.co/ucGAHFLwGW

The fire last week destroyed Sunday school classrooms, a library, meeting rooms and church offices as flames tore through the building before dawn. No one was injured, but the fire incinerated baptism, marriage and other historical records that community members called irreplaceable.

Police have not taken into custody any suspects in relation to the suspected arson or the two incidents at the KZV Armenian School, SFPD Spokesman Robert Rueca said Wednesday. The department has stepped up security at the church, performing nighttime patrols on Commonwealth Avenue, as well as near the school on Brotherhood Way.

Last month police released surveillance video of the vandals who spray painted messages such as “F— ARMENIA,” “U WILL PAY” on the school’s walls and gates, as well as sexist slurs against the Kardashians, a celebrity family of Armenian heritage. The video, taken on the night of July 24, showed four vandals jumping over the school fence with paint cans while two others stood as lookouts.

Blanca Moran, who lives near the church, was awoken by the sound of male voices and shattered glass around 3:30 a.m. on Sept. 17, the morning the fire broke out at the church office. She smelled smoke drifting through her open window and quickly checked to see if her own house was on fire, but found nothing.

Hearing voices outside, Moran walked to the lawn in front of the church offices, where she met two men who were taking video of the building on their phones. They pointed to the offices when she inquired about their presence in the neighborhood. It remains unclear if the two men played any part in the suspected arson.

Moran returned to her home, and the men disappeared before police and fire crews were called to the scene half an hour later.

The church fire and school vandalism appear to be part of a series of attacks on Armenian meeting places around the world following a flareup of tensions on the Armenian-Azerbaijan border. European media outlets reported that a Turkish nationalist group in France disrupted an Armenian demonstration and desecrated a statue of a priest who was imprisoned during the Armenian genocide. Police in Moscow reportedly arrested more than 30 people after groups of Azerbaijanis beat up Armenians and attacked Armenian-owned stores.

The Bay Area’s Armenian community is offering a $25,000 reward to anyone with information that leads to an arrest of those involved in the incidents, said Abraham Panossian of the Armenian Cultural Foundation.

Moran, the church neighbor, said she is aware of the reward. But, like the Armenian community, she would prefer to see a resolution.