It was said too much about great Armenian son William Saroyan in past.
It gone too much time with a silence about him.

A new Newsletter is been published in San Francisco, California.

If there are ANY comments, memoirs, links or critics, please post here.
Let us together not allow this name and his heritage to be forgotten.

ITHACA, AN ADAPTION OF WILLIAM SAROYAN'S NOVEL THE HUMAN COMEDY SLATED FOR RELEASE AT THE END OF 2016

The film Ithaca, an adaption of William Saroyan's novel The Human
Comedy is slated for release on December 31, 2016. The film is the
directorial debut of Meg Ryan.

Ithaca is a coming-of-age tale about Homer Macauley, a fourteen year
old bicycle messenger whose big brother is off at war. Homer has
to look after his widowed mother, sister and youngest brother while
yearning to be the fastest two-wheeled messenger in the world.

The messages he delivers to the local people run the gamut of love,
hope and horrible news from the war front. Tom Hanks plays Mr.

Macauley, the deceased family patriarch (presumably seen via
flashback). Meg Ryan is Ms. Macauley, the wife and mother. Both parts
are small. The starring role is that of Homer, played by relative
newcomer, Alex Neustaedter.


In Meg Ryan's directorial debut, she directed and starred in a film called
Ithaca, based on Armenian American William Saroyan's novel titled The
Human Comedy. This year at the Sonoma International Film Festival (SIFF)
in Northern California, Meg Ryan will be honored with a Sonoma Salute Award
at a tribute event on Thursday, March 31. The event will begin with a
screening of Ithaca at 3:30 PM.

Based on Pulitzer Prize-winning author William Saroyan's 1943 novel,
Ithaca centers around the fictional town of Ithaca, California during
World War II. It is a story about 14-year-old Homer Macauley, who is
determined to be the best and fastest bicycle telegraph messenger anyone
has ever seen. His older brother has gone to war, leaving Homer to look
after his widowed mother, his older sister, and his 4-year-old brother. The
Human Comedy is based on Saroyan's personal life, growing up in Fresno
with his siblings and his mother.

Ryan was inspired to film this movie when she read The Human Comedy while
going through her divorce with Dennis Quaid, when her son Jack - who is
also cast in the movie - was 8. `I kept thinking, `How do you become a man?
I mean is he going to be all right?' And I remember reading all kinds of
things, and I got to this book, and it's about so many things...there was so
many great ideas inside of it,' she said in an interview with Deadline.

The film Ithaca was initially released on October 23, 2015, starring Meg
Ryan, Tom Hanks, Sam Shepard, and Jack Quaid. The Human Comedy had
previously been made into a film in 1943 with actor Mickey Rooney. That
year, Saroyan won the Academy Award for Best Story for this film.

Ithaca will be featured at SIFF, which kicks off on March 30 and runs
through April 4. In the 19th year of SIFF, nearly 200 filmmakers from
around the world are expected to attend. The film festival will feature
more than 90 hand-selected films including independent features,
documentaries, world cinema, and short films. The Festival is dedicated to
promoting independent film, supporting filmmakers around the world and
inspiring film lovers. The publication of William Saroyan’s first book in 1934 drew the ire of Ernest Hemingway, who felt insulted by Saroyan’s remarks in “Seventy Thousand Assyrians”. In January 1935 edition of Esquire magazine Hemingway poured harsh criticism on Saroyan.

PanARMENIAN.Net - Although the opinion of Hemingway, who was a popular writer at that time, was very important and weighty, it could not prevent Saroyan’s appearance in literary world.

"Last week a new writer emerged on the American horizon. At first glance, no bigger than the palm, this phenomenon promises a change of climate and can grow into a cyclone one day," Time magazine said, distinguishing the unique style of the writer. “Saroyan is the new name in short story genre. No story has aroused so much excitement and interest for a long time. He is the most talked about and popular young author in America. His talent is as bright as Faulkner, Dreiser or Lardner’s.”

Saroyan’s influence on American literary life was so great in 1930-1940s that he became an embodiment of new philosophy of values. During the years of Great Depressions his evergreen optimism revived hope in lots of desperate hearts. Henry Miller offered him to work on joint projects, while Charles Bukowski and Jack Kerouac were inspired by his inner freedom. Nevertheless, Hemingway gave a hostile reception to Saroyan, who was perceived as a phenomenon of life and a symbol of his time.

“Hemingway’s heroes remain unconquered after the battle with life, while Saroyan’s heroes come out the victors.”

Ernest Hemingway burst into the world literature as one of those who wrote about the so-called “lost generation”, young people, who survived the horrors of the WWI but lost the ability to live an ordinary life

“Although a great number of works were written on the topic, Hemingway stands out from the rest thanks to the spirit of his heroes,” Vladimir Maslennikov, a member of Yelaket literary club, told PanARMENIAN.Net

“Hemingway’s characters bear up against misfortune and move forward despite absolute hopelessness. The theme of confrontation and constant fighting prevails in Hemingway’s works and here a parallel with Saroyan’s stories should be drawn, as he also used to tell about simple people, who come across war, disappointment and pain.”

However, according to Maslennikov, Saroyan’s view of life was broader. His heroes – sincere people – try to learn to live in an absurd and cruel world, but still believe in justice and love. “Hemingway’s heroes remain unconquered after the battle with life, while Saroyan’s heroes come out the victors,” he said.

They got acquainted in London and fought in Paris

In 1944 Hemingway stayed at Dorchester Hotel in London. His room has become a hub for authors, war reporters and photo journalists. Saroyan once appeared there with Hemingway’s younger brother Lester. However, neither this meeting nor the following ones helped them become friends. The two writers even had a scuffle in Paris café, where you still can see a board saying “Hemingway and Saroyan fought here.”

Their relations remained the same ten and twenty years later. They remained rivals till the end, although each acknowledged the other’s genius. Saroyan used to say: “Hemingway is the greatest English writing author. He wrote like it was an Old Testament… Many tried but couldn’t.”

“He couldn’t come to terms with his age. I think people die because they want to die. You just should not agree to die. I, for example, could have been dead for a long time, but I do live,” Saroyan wrote about Hemingway.

Hemingway was found dead of a shotgun wound in the head at his home on July 2, 1961. His wife, Mary, said that he had killed himself accidentally while cleaning the weapon.

Saroyan died in Fresno, of prostate cancer at age 72 on May 18, 1981. Half of his ashes were buried in California and the remainder in Armenia at the Komitas Pantheon. His final statement for publication after his death was: "Everybody has got to die, but I have always believed an exception would be made in my case. Now what?"

To remind, the foundation acquired the writer's house in 2015, and for about a year the foundation was engaged in studying the life and work of W. Saroyan, was searching and collecting the materials about him, as well as working together with the "Storaket" architectural studio was busy to develop a house-museum concept. And now, it is high time to start the construction work.

The construction work starts with exterior appearance reconstruction, and after getting the corresponding agreements with Fresno City Municipality, interior work also will start. The house-museum is scheduled to open on 31 August 2018, on the 110th anniversary of the writer.

Atlas Obscura
Aug 17 2019
William Saroyan's Grave Half of the Pulitzer Prize-winning author's ashes were buried in Armenia.
When American-Armenian author William Saroyan died in Fresno, California, he had an unusual request. He wanted his body cremated, with half of his ashes buried in Fresno’s Ararat Armenian Cemetery and the other half in his homeland of Armenia. 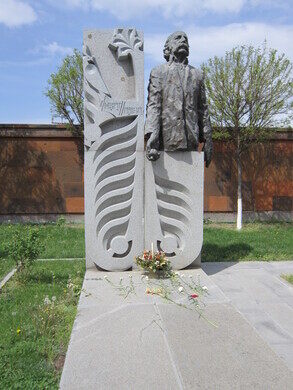 You can, therefore, find Saroyan’s grave at the Komitas Pantheon of Yerevan, among the greats of the Armenian art world. Although the writer lived his life during the Cold War, with Armenia behind the iron curtain, he visited the country and maintained friendships with some of Soviet Armenia’s artists.

In 1991, this American-Armenian winner of both the Pulitzer Prize and an Academy Award was honored with the one and only joint stamp ever issued by the United States and the Soviet Union. His self-penned epitaph states: “In the time of your life, live – so that in that wondrous time you shall not add to the misery and sorrow of the world but shall smile at the infinite delight and mystery of it.” 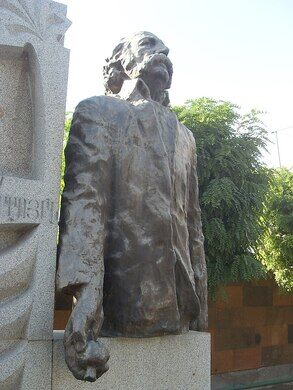