The 1st day of Christmas


11 replies to this topic I've heard lot of stories why in the west Christs Birth is celebrated on Surb Stepan day (St. Steven) but it's ok ~ gives us another day to be with family and kiss them or think about them ~ Anyway ```

On the second day of Christmas ~ Uncle George came, he always brings Jordan Almonds, he sings and plays the violin ```

On the 10th day of Christmas Anoosh gave to me ```

Twas the night before Gakhant, when all through the doon
Not a gentani was stirring, not even our shoon.
The Koolbas were hung by the vararan with care,
Just after Medz Mayrig had washed them in the sink with hands bare.

The bzdeegs were nestled all snug in their beds,
While visions of Anoushabour danced in their heads.
And Mayrig in her kisheranots, and I in my Peejama,
Couldn’t wait till the morning so we could eat some fresh baklava.

When out on the lawn there arose such an amoog,
I sprang from the angokhin to see if it was a karnoog.
On the way to the badoohan I stubbed my poor dodig,
Tore open the badoohan and yelped like a shoonig.

The loosyn on the breast of the new-fallen tsooyn
Showed the bruise on my dodig in a sev and jermag kooyn.
When the tsav settled down and I stopped squirming like tsoogs,
I looked right outside and saw 8 tiny Eshoogs.

With a little old mart, Could it be? Haba?,
I knew in a moment it must be Gakhant Baba.
More rapid than Trchoons those gentanees came,
And he bora’ed, and ganche’ed, and called them by name!

As vardeegs that are hung outside to dry fly,
When they meet with the hov, and fly to the sky.
So up to the Danik the Eshoogs they flew,
With the Gark full of Toys, and Gakhant Baba too.

And then, in a vargyan, I heard on the Danik
The prancing and pawing of each little Eshoog.
As I drew midkis mech, and was turning around,
Down the Vararan Gakhant Baba came with a bound.

His Shabig and Pantolon were all colored Garmeer,
But his clothes were all sep-sev thanks to the ashes…oh dear.
A bundle of Khakhaligs he had flung right onto his back,
He looked like THE ARMENIAN VENDOR, standing there just opening his pack.

A piece of fresh soojookh he held tight with his teeth,
And the smell of that soojookh went straight to your keet.
He had a broad khntoom eres, and a medz round Stamoks,
That shook when he laughed, and knocked off his aknots!

He was keroog but jarbig, a right jolly old mart,
And I laughed when I saw him, with all of my heart!
A wink of his Achk and a twitch in his Kit,
Soon gave me to know  he didn’t mind it one bit.

He spoke not a par, and worked real Shood,
And filled all the koolbas, he packed them real good.
And laying his mahd aside of his keet,
He shot up the vararan, and landed on his feet! 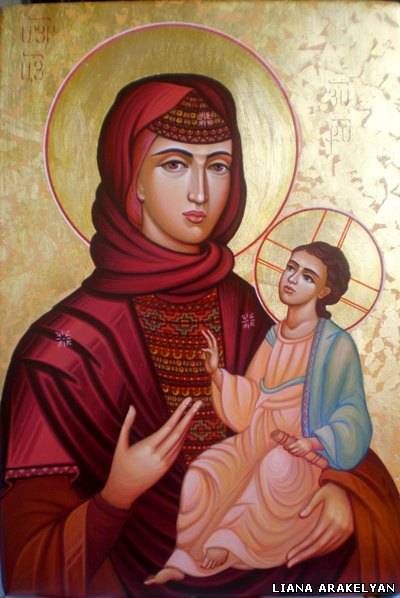