Following the latest controversies, Sweden’s Turkish National Association risks having to pay back millions of krona the union earlier received in government grants; competent bodies question whether the association can be considered democratic at all, Sputnik News reports.

On April 9, Barbaros Leylani, then vice president of the Turkish National Association, raised hell with a speech at a demonstration in Stockholm, where he announced his support for Azerbaijan in the Nagorno-Karabakh conflict. Also, a number of flag-waving members of the Grey Wolves, a Turkish supremacist, far-right and neo-fascist organization, were spotted at the demonstration.

“Death to the Armenian dogs! Death! Death!” Leylani shouted, among other things, according to Göteborgs-Posten.

This triggered an investigation to find out whether the Turkish National Association reflects the basic requirements of democratic values.

“This statement was not consistent with respect for human equality and human rights, and therefore we [initially] started this investigation on our own initiative,” says Anders Hagquist, communications director at the National Agency for Youth and Civil Society, MUCF.

Barbaros Leylani was forced to apologize and leave his post at the union. However, his confrontational statements are not the only thing that is now being investigated, according to Anders Hagquist. Numerous minority organizations and former members of the Turkish National Association have formally criticized the organization’s texts and speeches for being “hateful.”

“We have received many complaints in the past and now we need to examine them again, considering the recent situation,” he said.

“I was very, very worried when I saw the clip. This is very unnerving,” president Garlen Mansourian told TV4.

Despite the frequent complaints, the Turkish National Association has continued to receive state support of over half a million krona per year. According to the news portal Nyheter24, the state aid from MUCF (whose primary aim is to combat racism and promote integration in Sweden) amounted to 630,000 krona (roughly 80,000 dollars) last year alone. Now, MUCF may very see its funding cut, which spells doom.

This would be a disaster for the Turkish National Association, Union Secretary Yasin Ipek told Swedish Radio.

“We would probably go out of business and cease to exist as an association,” he said.

“We are neither racists nor fascists. You cannot punish the whole union because of one person,” he says.

According to the Swedish Riksdag, which endorses state aid to minority societies, the Turkish National Organization is a large association, comprising over 12,000 members. At present, over 50,000 Turks are estimated to be living in Sweden.

December 1, 2016  13:23
Barbaros Leylani faces trial for making insulting remarks about Armenians
The Turkish politician, who made insulting remarks about Armenians during last year’s anti-Armenian demonstration organized by Azerbaijani and Turkish population at Sergels Square in the center of the Swedish capital, had to stand in front of the court, Panorama.am reports, citig Ermenihaber. STEPANAKERT, DECEMBER 1, ARTSAKHPRESS: Already former Vice Chairman of Turkish National Association Barbaros Leylani, who called for the death of “Armenian dogs” during the protest, has recently testified in the court.

Leylani has commented on his statements claiming that “being in a bad psychological state, he delivered his speech on the spot without preparing it previously”. Turning to the word “dog” he has noted that he used the remark to accuse those Armenians who support terrorism, and it did not refer to the peaceful citizens.

At the end of his testimony he said “I apologize” in response to the judge’s question whether the defendant has anything to add.

Noting that the statements made by Leylani incite hatred towards an ethnic group, the Prosecutor has asked to impose a suspended sentence and a fine. The verdict will be issued on 14 December.

One of the Swedish TV channels broadcast the video of the anti-Armenian speech, which was followed by heavy criticism. Afterwards Leylani said that he made the remarks driven out of impulses and they should not be considered threats.

However his justifications were not accepted and he had to resign from the position of the Vice Chairman. In addition to this, over 50 Armenian, Kurdish and Swedish organizations operating in Stockholm submitted applications to the Prosecutor’s Office demanding to punish Leylani.

just thinking, what will he do wan his  lacked in a  room w an Armenian Dog  - GAMPER

Good one, he'll apologise to the Gamper as well. These type of Turks will never change! 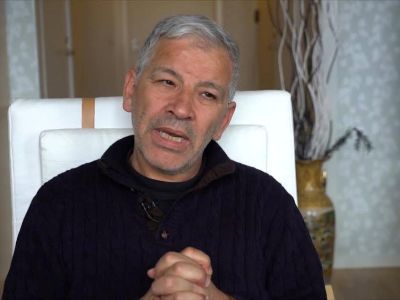 The Stockholm District Court on Wednesday made a formal judgment on the case of former Deputy Chairman of the Turkish National Association of Sweden, Barbaros Leylani, who had made several xenophobic and anti-Armenian statements containing clear expressions of incitement to violence, hatred, and racial discrimination, at a demonstration of the Azerbaijani, Turkish, and Turkmen communities of Sweden, in capital city Stockholm on April 9.

Pursuant to Chapter 16 Section 8(2) of the Penal Code of Sweden, the court found Leylani guilty of aggravated criminal agitation and hate speech against an ethnic group, and sentenced him to a two-year suspended prison term and a fine.

At the earlier trial on November 30, the prosecutor had motioned to charge Leylani with a suspended sentence and a fine, with explanation that his statements contained clear incitement to violence against a specific ethnic group, and which was made publicly in downtown Stockholm.

The attorney, however, had motioned the court to impose only a fine, claiming that Leylani was in an unstable mental condition when making these statements, he had been using medicine, and his respective remarks were delivered without prior preparation.

The court adjudicated to fully grant the prosecutor’s motion, and deemed these racist and anti-Armenian statements of Barbaros Leylani as a criminal offense.