The molecular biologists have won the 2021 Nobel Prize in Physiology or Medicine for their discoveries of receptors for temperature and touch, the Nobel Committee has announced in Stockholm. 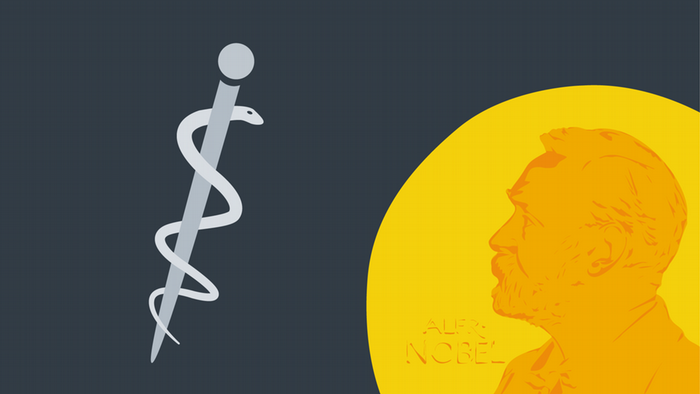 The Nobel Prize for Medicine starts a week of prizes

David Julius and Ardem Patapoutian have been awarded this year's Nobel Prize in Physiology or Medicine.

The Nobel Committee's Thomas Perlmann said Julius and Patapoutian had "unlocked one of the secrets of nature," and that is how we sense and feel our way around in the world. Our sense of touch, how we sense depth, reach out for things, and also how we experience pain.

In a year when many may have expected the prize to go to at least one of the makers of a COVID-19 vaccine, Perlmann said this was deemed the most important discovery in Physiology or Medicine in 2021. He said he couldn't say more without "breaking confidentiality."

This is basic research, which the committee says will have benefits for future drug development.

As for the developments in coronavirus research over the past year and a half, the committee would only say that it worked on the basis of discoveries that had been nominated.

They wouldn't say whether drug and vaccine discoveries against SARS-CoV-2 had been nominated. 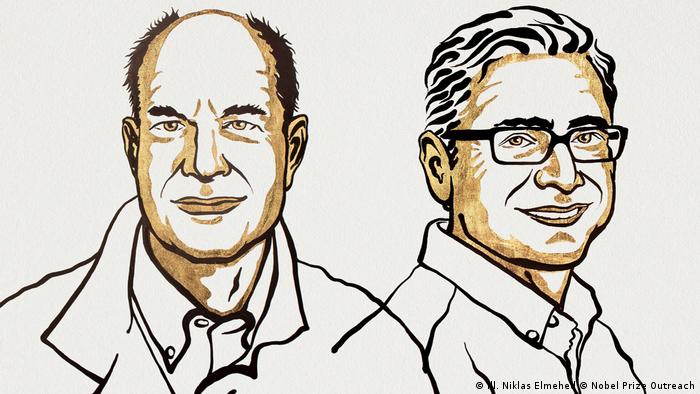 Julius and Patapoutian's work will be used in future drug developments

We move about in the world as though it were second nature — and, indeed, it is.

But until this novel research into proprioception, the Nobel Committee says we had yet to work out how temperature and mechanical stimuli get converted into electrical impulses in the human nervous system.

That is how we sense and perceive temperature, and even pain, and why those senses and perceptions are different for many people.

Some of us feel the cold more than others. Some of us can walk over burning coals, and others simply can't stand the heat.

And it's the way that the nervous system interprets those electrical impulses that determines how we react and feel.

Perhaps that's why David Julius landed on capsaicin as a basis for his research.

Capsaicin is a chemical found in chili peppers. It's what makes chilis burn the nerve endings on our tongues or our eyes if we touch them after cutting up a chili.

Julius used that chemical irritant and the burning sensation it creates "to identify a sensor in the nerve endings of the skin that responds to heat."

His work led to the discovery of TRPV1, an ion channel that is activated by painful heat. Ion channels are proteins that allow ions, such as sodium, potassium, calcium, to pass through the cell membrane. They are vital for the nervous system, the contraction of the heart and skeletal muscle and other physiological functions.

And this particular one allows us to understand pain just a little bit better.

Ardem Patapoutian, meanwhile, used "pressure-sensitive cells to discover a novel class of sensors that respond to mechanical stimuli in the skin and internal organs," the committee writes.

What did Patapoutian's team do? They poked a cell with a small pipette (a micropipette) and watched how 72 individual genes within the cell reacted.

They found two genes within the cell that were insensitive to their being poked. But it was more than that: Those genes, it seems, could switch their sensitivity off.

The two genes were names Piezo1 and Piezo2. "Sensory neurons were found to express high levels of Piezo2 and further studies firmly established that Piezo1 and Piezo2 are ion channels that are directly activated" when pressure is exerted on cell membranes.

It's now said that TRP and Piezo channels influence a range of physiological functions that depend on how we sense temperature or "mechanical stimuli" — that could be the prick of a vaccine needle — and how we adapt to those sensations.

Placed together, the discoveries have been influential for our understanding about core body temperature, inflammatory pain, protective reflexes, respiration, blood pressure, and urination.

"This knowledge," says the Nobel Committee, "is being used to develop treatments for a wide range of disease conditions, including chronic pain."

Who are the winners?

David Julius is a biochemist and professor of physiology at the University of California, San Francisco. In 2020, Julius was awarded the Kavli Prize in Neuroscience for this same body of research. It was cited as having created new approaches for the development of safe and targeted painkillers that may have lower addictive properties than opioids.

Ardem Patapoutian, a professor of neuroscience at Scripps Research, an institute in California in the US, shared that 2020 Kavli Prize with Julius. It wasn't the first time: In 2019, they shared the Rosenstiel Award for Distinguished Work in Basic Medical Research. And now they share a Nobel Prize.

Medicine is always the first in a week of Nobel Prizes. Tuesday is traditionally the day for the Physics prize and Wednesday it's Chemistry.

Later in the week, there will be Nobel Prizes for Literature and Peace, and then Economic Sciences.

Pomp and ceremony in December

In 2020, the Medicine prize was won by Harvey J. Alter, Michael Houghton und Charles M. Rice for the discovery of the Hepatitis C virus.

The Nobel Prize for Physiology or Medicine has been awarded 111 since the prize's first year in 1901. It's gone to 222 scientists, including two married couples, but only 12 women.

This year's winners receive cash prize of 10 million Swedish Krona (about €980,000), a Nobel Medal and a range of other trinkets.

But they will have to wait until December 10, because tradition also has it that the prizes is handed out at a gala dinner in Stockholm.

STOCKHOLM, Oct 4 (Reuters) - American scientists David Julius and Ardem Patapoutian won the 2021 Nobel Prize for Medicine on Monday for the discovery of receptors in the skin that sense temperature and touch and could pave the way for new pain-killers.

Their work, carried out independently, has helped show how humans convert the physical impact from heat or touch into nerve impulses that allow us to "perceive and adapt to the world around us," the Nobel Assembly at Sweden's Karolinska Institute said.

"This knowledge is being used to develop treatments for a wide range of disease conditions, including chronic pain."

Patapoutian, who was born in 1967 to Armenian parents in Lebanon and moved to Los Angeles in his youth, learnt of the news from his father as he had been out of contact by phone.

"In science many times it is the things we take for granted that are of high interest," he said of winning the more than century-old prize, which is worth 10 million Swedish crowns ($1.15 million).

He is credited for finding the celular mechanism and the underlying gene that translates a mechanical force on our skin into an electric nerve signal.

"(For) us being in the field of sense, touch and pain, this was the big elephant in room where we knew they existed, we knew they did something very different," he said.

Patapoutian is a professor at Scripps Research, La Jolla, California, having previously done research at the University of California, San Francisco, and California Institute of Technology, Pasadena.

New York-born Julius, 65, is a Professor at University of California, San Francisco (UCFS), after earlier work at Columbia University, in New York.

His findings were inspired by his fascination for how natural products can be used to probe biological function and he used capsaicin, the molecule that makes chili peppers spicy by simulating a false sensation of heat, to understand the skin's sense of temperature. 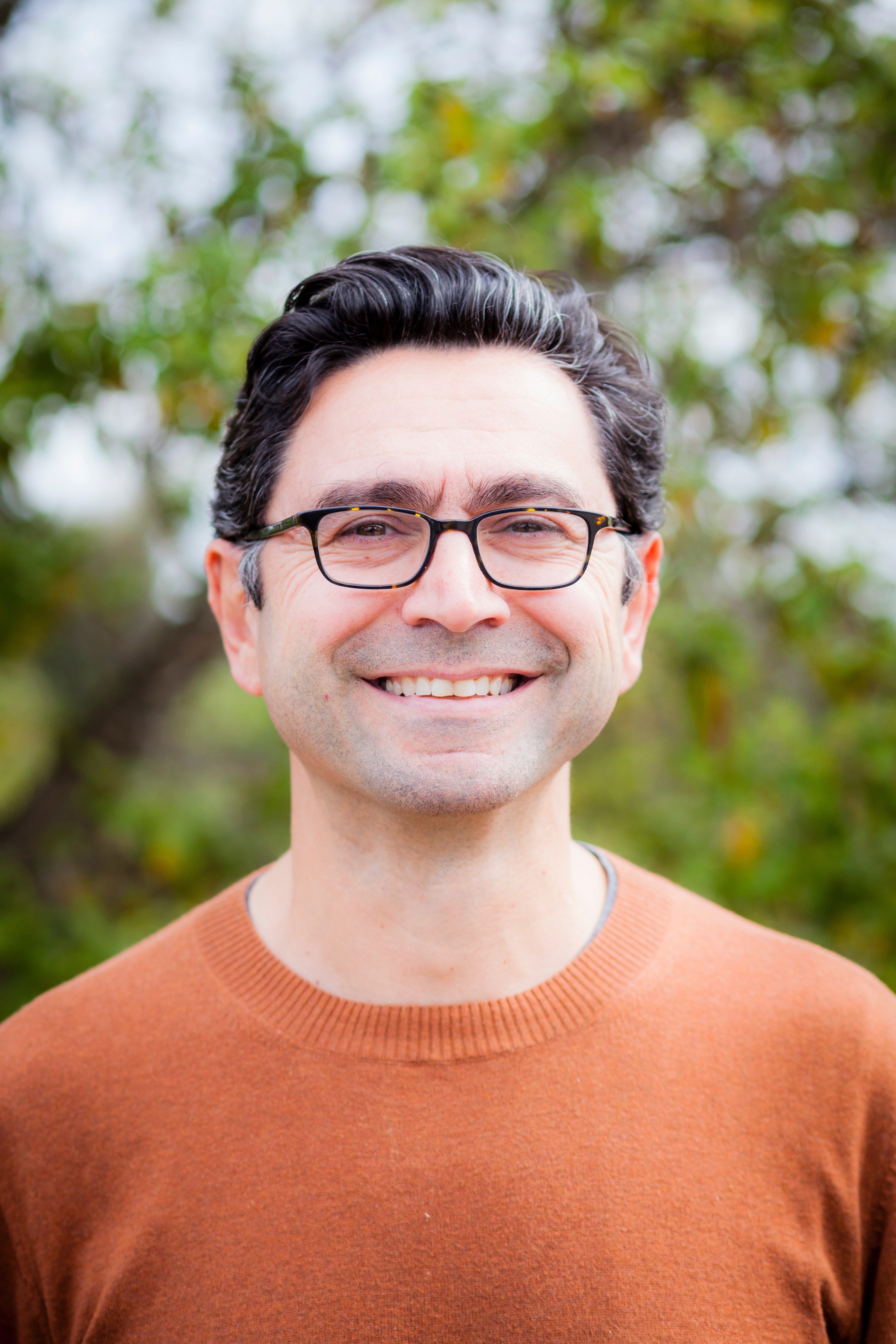 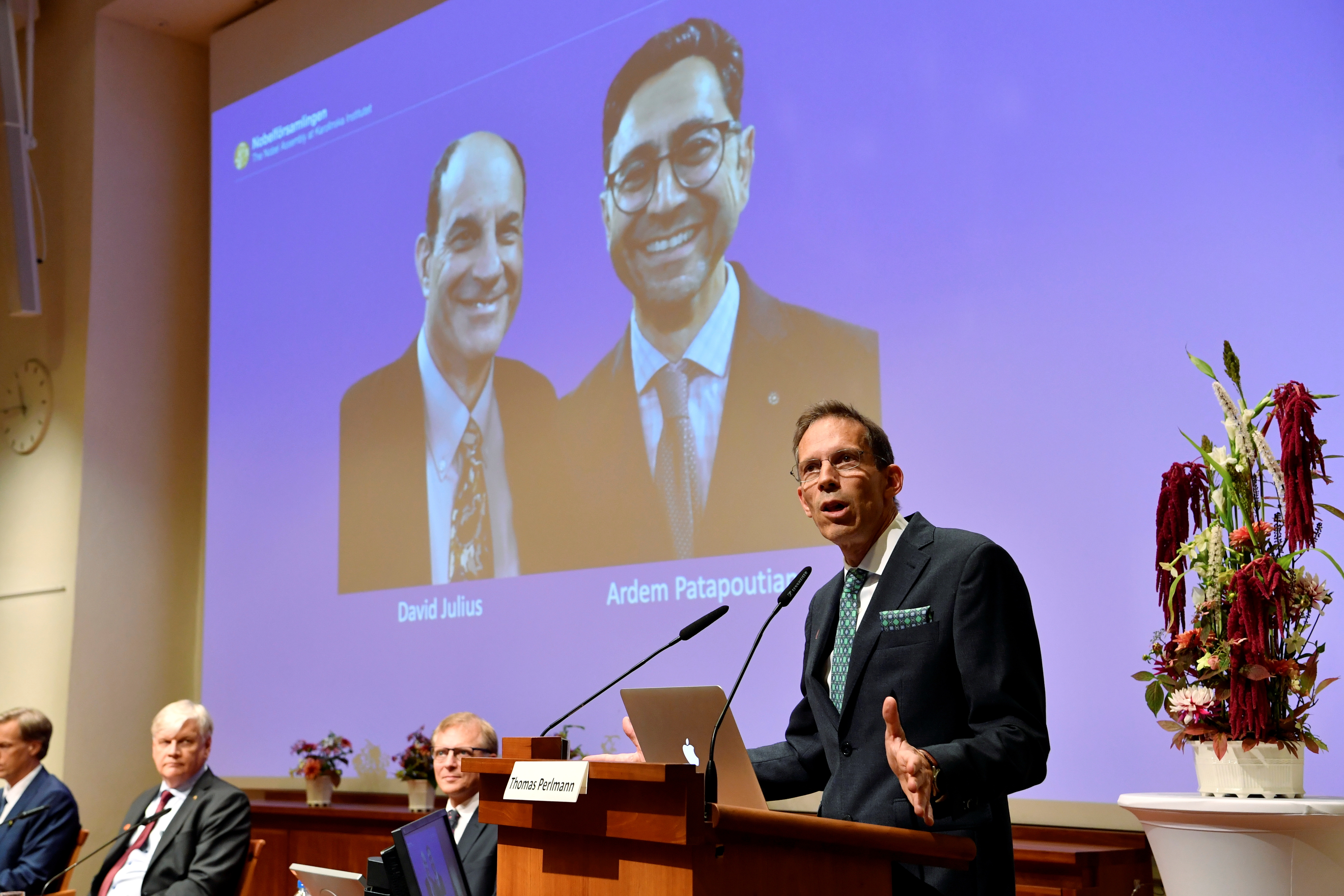 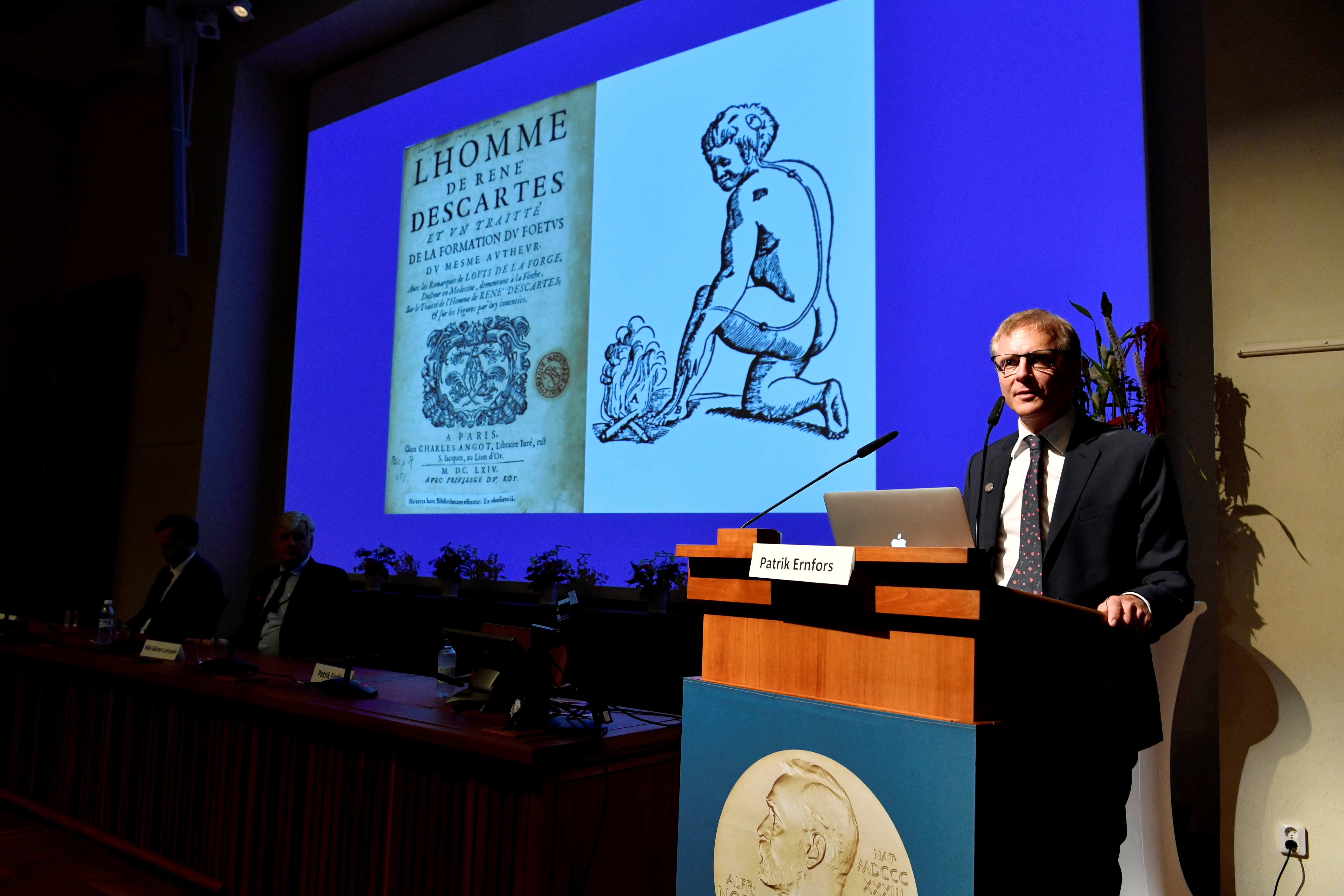 Thomas Perlmann, Secretary of the Nobel Assembly and the Nobel Committee, announces the winners of the 2021 Nobel Prize in Physiology or Medicine David Julius and Ardem Patapoutian (seen on the screen) during a press conference at the Karolinska Institute in Stockholm, Sweden October 4, 2021. T TT News Agency/Jessica Gow via REUTERS

"We all know there's a real lack of drugs and approaches to treat chronic pain," Julius said in a 2017 video posted on Youtube by UCSF. "I think we need some new insights and new ideas for treating pain, pharmacologically and other ways, and I think our work will contribute to that."

Both laureates were caught off guard, according to the committee. Professor Thomas Perlmann, Secretary-General for the Nobel Assembly and the Nobel Committee for Physiology or Medicine, described them as "incredibly happy and as far as I could tell very surprised and a little bit shocked."

The prestigious Nobel prizes, for achievements in science, literature and peace, were created and funded in the will of Swedish dynamite inventor and businessman Alfred Nobel. They have been awarded since 1901, with the economics prize first handed out in 1969.

The Nobel Prize for Physiology or Medicine, shared in equal parts this year by the two laureates, often lives in the shadow of the Nobels for literature and peace, and their sometimes more widely known recipients.

But medicine has been thrust into the spotlight by the COVID-19 pandemic, and some scientists had suggested those who developed coronavirus vaccines could be rewarded this year or in coming years.

The pandemic continues to haunt the Nobel ceremonies, which are usually full of old-world pomp and glamour. The banquet in Stockholm has been postponed for a second successive year amid lingering worries about the virus and international travel. read more