25 replies to this topic

Hawthorn Caller
Oct 27 2018
France to pay national homage to singer Aznavour at Paris ceremony Posted by Caroline Biscotti on October 27, 2018 at 7:30 am

France will pay “national homage” to singer Charles Aznavour after he passed away this week, the French presidency said Tuesday, as an autopsy found the beloved performer died in his bathtub after suffering heart and breathing problems.

A ceremony to honour , one of France‘s most famous stars, will be held in Paris on Friday, the office of French President Emmanuel Macron announced.

Macron himself will deliver a speech at a ceremony to be held in the courtyard of Les Invalides, a complex of buildings and monuments related to French military history.

Aznavour, 94, was found dead on Monday at his home in the southeast, sparking for an entertainer who sold 180 million records during his .

Franco-Armenian Aznavour was discovered Monday lunchtime “lying in his bathroom bathtub, next to his bedroom,” prosecutor Patrick Desjardins told reporters near his home in the town of Mouries on Tuesday.

An autopsy found the death “occurred in the morning of October 1, in the wake of an acute oedema caused by cardiorespiratory failure,” Desjardins said.

“Foul play can be ruled out, but the circumstances surrounding the death are not precisely known.”

Aznavour had said last week that he wanted to breathe his last on stage and was scheduled to appear live in Belgium and France in the next few weeks.

His legions of fans have been left heartbroken by his death, while fellow entertainers lined up to pay tribute to his influence as a taboo-breaking singer and original songwriter.

Sting and Lenny Kravitz lauded the “eternal” legacy of the “gentleman” of traditional French singing, while Elton John wrote on Twitter that he was “honoured” at having sung with the man sometimes referred to as “France‘s Sinatra”.

Aznavour‘s fanbase spanned the world thanks to his role in Francois Truffaut‘s film “Shoot the Piano Player” in 1960 that catapulted him to fame outside France, as well as his commercial success in America and loyal following among the Armenian diaspora.

On Hollywood Boulevard in Los Angeles, wellwishers layed flowers on the pavement star bearing his name, while Armenia commemorated him in parliament and on the underground train stations in the capital Yerevan, which played his songs.

The Armenian government also decreed a day of mourning to coincide with the day on which he will be buried in France, with details of his funeral still unknown.

Aznavour was born in Paris on May 22, 1924, to Armenian parents who had fled the massacres in their homeland and the singer would say that Armenians were “in my heart and in my blood”.

He had been due to accompany Macron as a guest of honour at a summit of francophone countries in Armenia on October 10 and 11.

In Lebanon, which has a large Armenian population, his death was also front-page news and radio stations played his songs.

In Paris, the Eiffel tower was lit up in gold Monday night in his honour, while Mayor Anne Hidalgo called for the French capital to rename a street after him.

French newspapers Tuesday splashed the singer on their front pages, with several praising him as the “last of the giants”.

Aznavour, who was three-times married, leaves a wife, Ulla, and five surviving children.

Friday‘s ceremony in Paris will be the second time in a year France has held a day of mourning for one of its musical icons after hundreds of thousands of people lined the streets of the capital in December for the funeral and national homage to another iconic French singer, .

Elder daughter of legendary French-Armenian singer Charles Aznavour, Seda has published on Facebook the last photo of the great chansonnier before his death.

“Our last photo before his death!” she wrote, sharing the photo where the great singer is posed with Seda and sister Aida.

Aznavour passed away on 1 October at the age of 94. 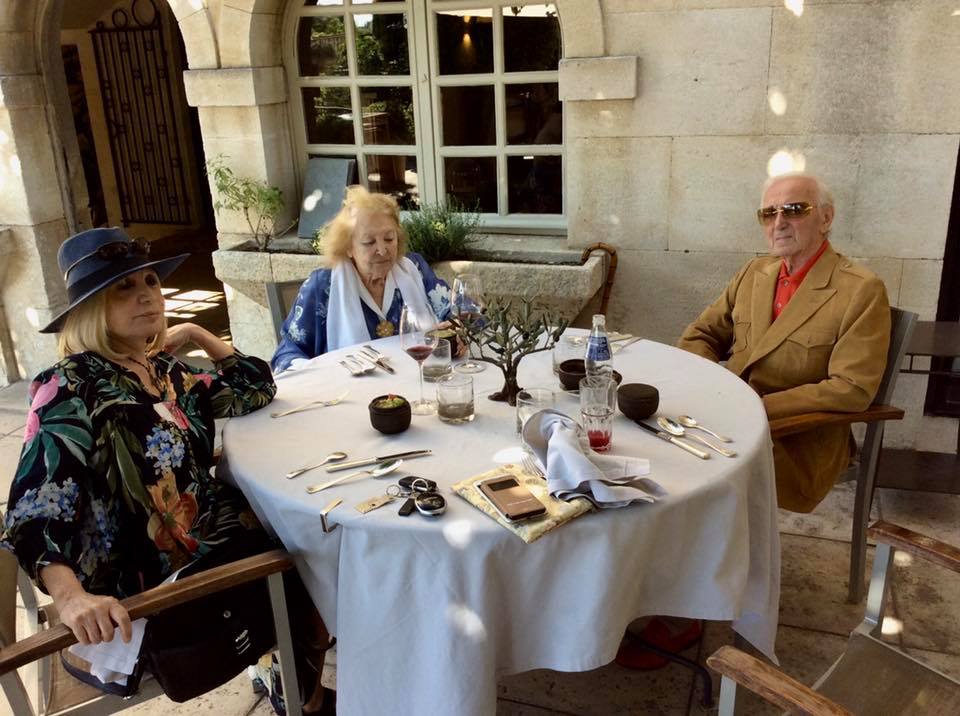 You got a love the half Armenians, I do! They do work harder than us the Armenians on both sides of the family.

Nicolas Aznavour, one of the sons of the legendary French Armenian artist, the late Charles Aznavour, was in Moscow. And he told the Russian-Armenian Information Agency (Rusarminfo) why he has decided to move to Armenia, and how he feels in his ancestral homeland.

Nicolas, who grew up in Switzerland, has been in Armenia numerous times. But it was this year that he made his final decision to move to the country.

“I love Yerevan, I like it, it’s comfortable there,” Nicolas Aznavour said regarding the capital city of Armenia.

But the main difficulty which he has faced in Armenia is his not knowing the Armenian language.

“Now I’m actively learning Armenian,” he said. “However, the Armenian language is very complicated, but I’m managing to speak [it] little by little. [And] by living in Yerevan, I can accelerate my [Armenian-language] learning.”

“I’m Armenian, and that’s not a subject for discussion,” added Nicolas Aznavour, who has Swedish roots from his mother’s side. “Perhaps, I don’t look like an Armenian in appearance, but there is a saying in French: ‘The clothes you wear don’t make you who you are;’ it truly is so.” 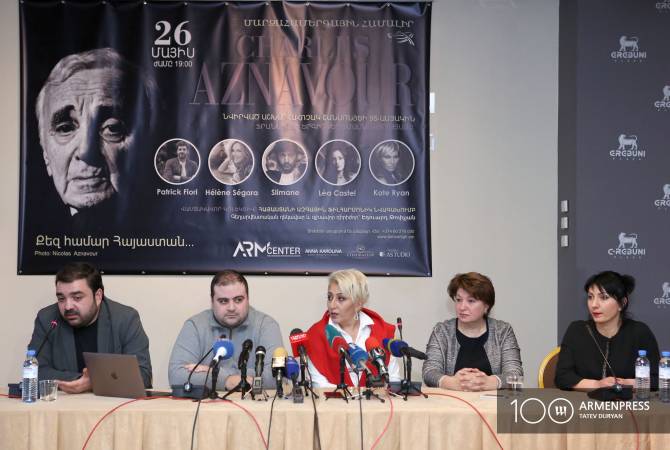 The concert “For You, Aznavour” will take place in the Karen Demirchyan Sports and Concert Complex on May 26, the organizers of the concert told reporters today.

“Each singer will sing one song of Aznavour and one more song from their songs. No dance or other performance will be held”, director Lusine Martirosyan said.

French-Armenian Hayk Shahbazyan, co-author of the project, said the French singers will perform with the Armenian Philharmonic Orchestra led by conductor Eduard Topchyan.

Director of the Armenian National Philharmonic Orchestra Ruzanna Sirunyan said they have accepted the cooperation proposal with pleasure and stated that there may arise some problems for the Orchestra because the concert is at the Sport Complex, but the organizers and the executives of the Complex will provide assistance to solve these problems

The concert is also planned to be held in Moscow and Paris.

Charles Aznavour’s statue to be installed in France 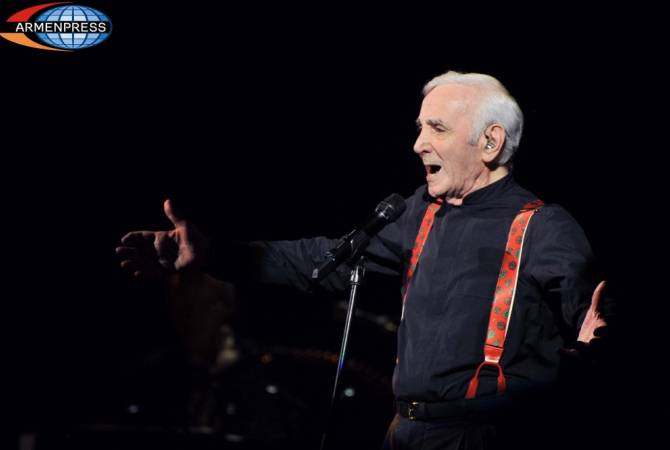 The purpose of the meeting was to discuss the 2024 program of events dedicated to the 100th anniversary of the late French-Armenian legendary singer Charles Aznavour.

Kristina Aznavour informed that the French side is preparing for the events, and the statue of Charles Aznavour will be installed in France by 2024. The design is ready, there are plans to hold a large-scale concert and an exhibition about Aznavour. The issue of installing Aznavour’s statue also in Armenia is being discussed with the Yerevan City Hall. The Director of the Aznavour Foundation proposed to hold all events in parallel with France, including the installation of the statue.

In turn Deputy Minister Martirosyan said that the Armenian side will cooperate with the Foundation with pleasure in implementing the program of events, adding that the jubilee of the legendary singer will be celebrated in Armenia as bright as in France.

“We are responsible that the Armenian-French agenda doesn’t suffer in any matter”, Artur Martirosyan said.

During the meeting the sides decided to establish an inter-agency commission to coordinate the expected events.

Artur Martirosyan informed that a coordinating working group has been set up for more effectively organizing and holding the program initiatives between all role-players of Francophonie. The first meeting of the group is scheduled on July 28, and French Ambassador to Armenia Anne Louyot is also invited to the meeting.

The Foundation representatives also presented the problems faced by the Yerevan State College of Culture and Art named after Charles Aznavour, the volume of investments and future plans. The Foundation invested 12,5 million drams for the college. The college is regularly holding master classes and inviting international specialists.

“Our goal is to open a path for children with a great potential to global stages and contribute to the development of their talent”, Kristina Aznavour said.