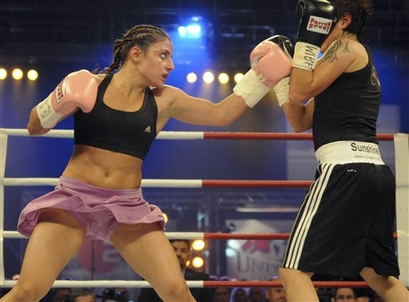 Unbeaten WBC/WIBF featherweight champion Ina Menzer (25-0, 9 KOs) edged jr. featherweight champion Esther Schouten (24-6-1, 13 KOs) by majority decision in a rematch. Their January clash was considered by many to be the female fight of the year. Menzer-Schouten II was even better. It was a very rugged fight with both women landing big shots and dealing out punishment. Schouten was the aggressor forcing Menzer to show all her technical skills. Schouten closed strongly, but in the end, scores were 96-94, 95-95, 96-94. With the win Menzer also picked up the vacant WBO belt. Will Menzer-Schouten be a trilogy?
Source: fightnews.com

At the end of the ten rounds, 24-year-old Kentikian defeated
19-year-old Pannimit on points, and with a unanimous decision by the
judges.

Fighting out of the red corner, Kentikian showed some ring rust after
11 months of inactivity due to issues with her former promoter. An
accidental headbutt early in round two drew first blood from above
her right eye. Despite the ministrations of her cutman between rounds,
the blood was a distraction.

"That was a headbutt," said Kentikian. "That's what happens."

Perez, fighting out of the blue corner, was tougher than the champion
expected. Her willingness to take two punches, or three or four
punches, to land one of her own forced Kentikian to dig deep. Perez
may lack Susi's superb footwork and combination punching, but she
has heart and a rock-solid chin.

"She was tough," said Kentikian. "I did not think that she would
constantly march forward. She is a warrior."

The "Killer Queen" definitely won the fight, wearing down her opponent
as the rounds progressed, but it might have been closer than the
scores suggested.

"That was literally a battle," she said. "I honestly did not expect
this."

Regina Halmich, the legendary flyweight who retired in 2007 with a
record of 54-1-1, was handling color commentary for German TV. She
expressed her admiration for Susi going out on her own and creating
Kentikian Promotions, but felt it might have been a disruption, putting
on a nine-fight card, in addition to training for a championship fight.

"I felt how excited Susi was," said Halmich. "That she has not her
old form was clear to see. She had to carry a huge burden and is on
the right track. "

To some extent Susi agrees.

"I had to look after everything myself," she said. "My mind was not
free for boxing. Under these conditions, I am satisfied with the
result. But the preparation was not as it should have been. Next
time I'll do it much better. I want no more long pauses. That is not
good for me. I'm just happy that I won the fight. It was a battle,
because my opponent was much tougher than I had expected. Luckily I
could fight until the end."


Berlin-based Armenian professional boxers `King' Arthur Abraham and
`Killer Queen' Susi Kentikian have been voted as the best in their
weight divisions in Germany.

The voting was conducted by Germany's leading boxing magazine SportBox.

WBO super middleweight champion Abraham, who turns 36 later this
month, won the prestigious title for the seventh time in his career.

Kentikian, 28, was named the best in the WBA version.

Meanwhile, Abraham's coach Uli Wegner was named the coach of the year
winning this nomination for the 13th time.

Abraham will have his next bout in Las Vegas on April 9 against
24-year-old Mexican opponent Gilberto Ramirez.