100 ARMENIANS WHO CHANGED THE WORLD

100 ARMENIANS WHO CHANGED THE WORLD

Armenians are an ancient nation whose sons and daughters have made quite an impact on the human history. Science, art, politics, finance – you’d be hard pressed to find a field, in which Armenian men and women don’t thrive. Their talents have made our world a much better place, so here are their names for the grateful descendants to remember!

100. MESROP MASHTOTS, INVENTOR OF ARMENIAN AND OTHER ALPHABETS

The alphabet was the key that allowed Armenians to preserve their culture and identity, thus lending them exceptional longevity.

Shaped an ideology that continues to influence Armenian thinkers, politicians and leaders to this day.

As catholicos he gave authority and energy to the idea that Armenians should be free, playing no small part in their eventual liberation.

Instrumental in recording and saving vast swathes of Armenian culture that may have otherwise been lost.

Credited with initiating what would later come to be known as the “Zartonk,” or “Awakening,” during which Armenians reasoned toward the necessity of a free Armenian state.

Killed Mehmet Talaat ***** in Berlin as part of “Operation Nemesis.”

The only woman on the Young Turk list of Armenians to be deported and killed on April 24, 1915.

An imposing and defiant voice of the Armenian community in the Ottoman Empire.

Lobbied the United States for the creation of an independent Armenian state and established ACIA, a precursor to ANCA.

One of the most acclaimed directors of the Soviet Union.

Awarded the Pulitzer Prize in 2016 for his book of poetry “Ozone Journal.”

The man who taught and inspired Stephen Hawking.

One of highest-ranking officials who served - and survived - four secretaries general.

An artist and significant figure in the history of Los Angeles art scene, owner of the Zorthian Ranch.

Registered one of the highest winning percentages, 6th all-time, in the sport.

The second Armenian in the Church’s 2,000-year-long history to be made a cardinal.

Established the Mekhitarist Order, an exclusively Armenian subsidiary within the Catholic Church.

Insisted on using observation and reason as the means to establish knowledge and procedure.

(HARUTYUN SAYATYAN), THE BARD OF THE CAUCASUS“If one obeys the will of the soul, then the body is offended. How shall I escape this sorrow?” 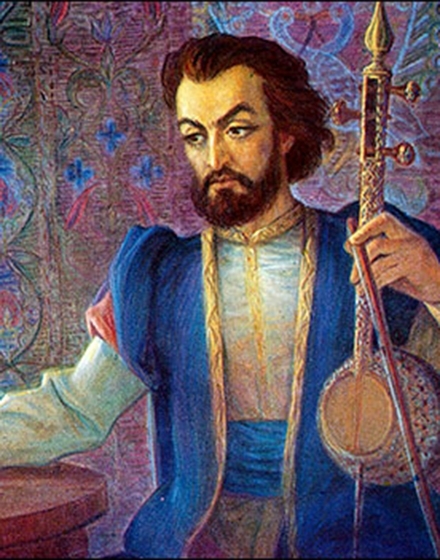 Interesting fact
Sayat Nova met his end when Agha Mohammed Khan Qajar, a Persian ruler, stopped at the monastery en route to Tiflis and commanded that everyone present renounce their faith and accept Islam. Sayat Nova refused and was immediately executed