Associated Press International
June 25, 2019 Tuesday 3:41 PM GMT
Ex-Armenian President Kocharian behind bars again
YEREVAN, Armenia
YEREVAN, Armenia (AP) - Former Armenian President Robert Kocharian has been jailed for a third time in a case that he contends is political revenge by the country's current leadership.
Kocharian was placed in custody Tuesday after an appeals court overturned a lower court ruling that had freed him last month.
Kocharian is charged with overturning constitutional order for ordering a police operation against protesters in 2008. Eight demonstrators and two police died in the clash. The country's current leader, Nikol Pashinian, was one of the leaders of that protest.
The 2008 demonstration was protesting the results of an election that declared Serzh Sargsyan as Kocharian's replacement. Sargsyan was president for 10 years, then tried to keep power by becoming Armenia's prime minister. Mass protests led by Pashinian drove Sargsyan out of office a year ago.

Armenia's government OKs raising minimum wage by 24% Armenia's government OKs raising minimum wage by 24% June 27, 2019 - 13:43 AMT PanARMENIAN.Net - The government on Thursday, June 27 approved a draft law on raising minimum wage in Armenia by 23.6% - from AMD 55,000 (approx. $115) to AMD 68,000 ($143). Deputy Minister of Labor and Social Security Gemafin Gasparyan said the move will cover 45,000 people working in the private sector and 35,000 others employed in the public sector. According to Finance Minister Atom Janjughazyan, the draft bill has nothing to do with the base salary which is used to calculate the salaries of public officials The bill has yet to be discussed and approved by the National Assembly. Earlier, lawmakers from the ruling My Step alliance had proposed raising the minimum wage in the country to AMD 63,000 ($132). 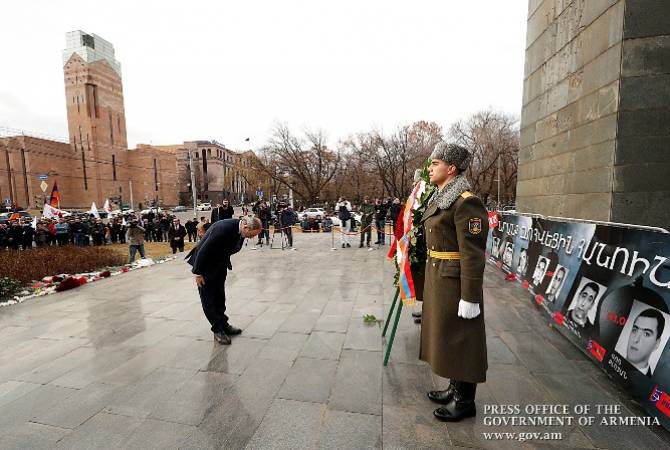 YEREVAN, MARCH 1, ARMENPRESS. Prime Minister Nikol Pashinyan, accompanied by his family, Cabinet members and other government officials, paid tribute to the memory of the 2008 March 1 unrest victims today, on the 12th anniversary of the events. The PM laid a wreath near the Myasnikyan statue in central Yerevan.

A rally was scheduled to take place, but the mass gathering was cancelled after authorities confirmed the first novel coronavirus case in the country.