Nairi Sharabkhanian, a Canadian and a female volunteer in Armenia, writes:

He [the taxidriver] scrunched his nose and raised one eyebrow.

“Why would you leave your rich life to come volunteer here?”

I was shocked. No one has ever referred to my life as “rich” and besides that, this was the first time someone was questioning my decision to come to my homeland for a 14-week volunteer service.

I sighed and replied, “Why not?”

One of the greatest difficulties in my life has been my identity. I am an Armenian living in a non-Armenian country, how could that be? I have devoted my entire life to teaching my Canadian “odar” friends about my culture and my people. I feel like it is my duty to return to my homeland and share my skills and talents with my own people.

“Are you getting paid?” he asked. “No,” I said. “You’re crazy for working here and not getting paid.”

Did this man really think I would only come here to get money?  “I understand life is difficult here,” I replied. “But every country has its issues. I’d rather live, with some struggles, in my homeland than in any other country. “

I volunteer because I care, because I’m human, and because this was the idea that I was brought up with in my household. I didn’t come here to change the country or the people. I came here to change myself, change my views of Armenia. The best way to understand Armenia is to live here. That’s why about 8 months ago I decided it was time for me to come and learn about my country and applied to Birthright Armenia, which ended up being an experience of a lifetime.

I CAME to Armenia to be with my people. By the end of my stay, I SAW Armenia from a completely different perspective than when I initially began my journey. Furthermore, I CONQUERED my fears and did something that only few Armenians have done in my community.

My four months in Armenia has been a journey. Feelings of confusion, frustration and being overwhelmed almost all the time became commonplace. I conquered another fear that I discovered in Armenia, my own journey of self-discovery. Although I was in that taxi for only 5 minutes it felt like hours. A million emotions were triggered by this man’s comments and soon I found myself wanting to tell him to keep driving me around so I can continue to tell him how lucky he is to live in a country that belongs to him.

My first few weeks living in Armenia were incredibly humbling. I won’t even hesitate to say that not speaking the language was the main reason. One example: Every day on my way to and from the metro station, I walked by a large shookah where vendors sold fresh fruits and vegetables. Every day, I wanted to buy a bag of fresh strawberries on my own to bring home to my host family (who was absolutely wonderful, by the way). It wasn’t until day 17 that I gathered the courage to do so — believe it or not, this was a huge milestone for me.

Another milestone occurred much later and much more gradually, when, to my pleasant surprise, getting ripped off by taxi drivers became a less frequent occurrence. There were plenty more milestones — far too many, in fact, to list in this blog.

By the time I left Armenia, I had experienced countless changes of mind and heart. When people from home asked what life was like in Armenia, I wanted to give an honest answer, but the truth was that I didn’t know yet. I realize now that two and a half months in Armenia was, for me, simply not enough time because I still can’t answer the question, “What is Armenia like?” Perhaps I never will completely. But it’s important to me that my idea of Armenia – my answer to the question, “What is Armenia like?” – is informed by reality to the best of my ability,  and I owe an enormous thank you to BirthRight Armenia (its wonderful staff and its participants who have become dear friends) for helping me start to make that possible.

It’s really unique, I think, that the Armenian idea takes on so many manifestations in and outside of the country itself. But whatever claims you might hear people making about the homeland, as outrageous, upsetting, funny, unrealistic, exaggerated as some might be, it’s important that the ideas are there. However far some may be from the reality, these ideas have proven that they have the power to motivate change, inspire curiosity, encourage action, and most importantly, when finally confronted with reality, ideas and perceptions themselves can change for the better. And when they do, the reality changes too.

In Armenia, students I taught would express shock at the amount of drug use and violence in the US. They also seemed to generalize Americans as cold and selfish, and on some level they are right.  In America we often neglect the notion of community and of family.  There are strong communities in America to be sure, but the feeling of national kinship in Armenia is much stronger than it is in America.  To understand what I mean, one must look no further than the Armenian sense of hospitality.  While a group of twenty-something Americans quibble over dividing the bill evenly amongst each member of the group, making sure that nobody pays a cent more than they owe, a young Armenian, financially poor by American standards, is happy to treat the group to dinner.  It is no exaggeration that an Armenian will quite literally give you the shirt off his back.  I have seen it happen.

The many possible reasons for this difference in culture are beyond the scope of this essay, but I believe the power of Armenian fellowship should not be underestimated.  Yerevan, despite being the largest city of a developing country, is a much safer city than most US cities, and I saw far less homelessness in Yerevan than I see in New York or Philadelphia.  Though it is just my own conjecture, I don’t believe it far-fetched to suggest that these observations derive from the tight-knit community in this small country.

Armenia is a young country with many problems, but it has the benefit of a vocal young population and a diaspora who is invested in its survival.  The younger generation seems to long for their nation to enjoy the same economic and social freedoms as the west, while maintaining their Armenian identity. The question is: What is to be preserved and what is to be improved? In order to answer this question, one must first decide what is central to the Armenian identity—what it means to be Armenian.  In the diaspora we have so many, often conflicting, ideas about this definition.  Therefore, I believe that going forward, the answer to what it means to be Armenian must ultimately come from Armenia itself.

As an American from the suburbs of New Jersey, I do not believe it is my place to be a part of defining what is important to the country of Armenia. But as an Armenian it is my job is to be a student of the issues that Armenia faces moving forward and to use this framework to inform my Armenian identity and the ways I can be a part of Armenia’s growth.
http://birthrightarm....wordpress.com/

This story by Cristina from Uruguay is touching, she goes in volunteer work to Armenia with Birthright Armenia and is able to learn to speak some Armenian. Comes back to Montevideo of Uruguay, enriched with her knowledge of speaking basic Armenian, and she comes in terms with her grandfather when she speaks Armenian with him. Soon her grandfather passes away happy that his granddaughter knows Armenian.

Admittedly, I’m no expert in the Armenian language. What am I saying, what expert? I’m not even an entry level speaker, I can’t read journalistic work and I am very far away from being able to write fluently.

However, having learned to speak the language in my months as a volunteer with Birthright Armenia has enriched me not only from the point of view of grammar or vocabulary but I have come to understand feelings, customs, habits, that I previously viewed with sympathy, but did not understand in their deepest essence. To this I add the practical part: I have the ability to communicate on basic level.

I can be too repetitive with the subject and sometimes I am tired of hearing myself talking about Armenia. And if Birthright Armenia gave me all these opportunities, then these are meant to be shared. But there is something that I have kept with me and I want to share now: my experience of  return—the exchange with my grandparents, Coco and Alicia, and especially my connection with my grandfather on his last days.

My grandfather was determined to speak to me in Armenian. Thus, he did not respond when I spoke in Spanish. “Grandpa, do you want water? … Agua, abuelo, dale, tomá un poquito” and he wouldn’t move or nod. Then as my last resort and with insistent despair, I asked, “Պապիկ, ջուր … մի քիչ … չե՞ս ուզում: Ջու՞ր” and then I received his confirmation. It was an achievement!

He also spoke about the hospital and the nurses and most of these I could not understand. That time we were transported to a new dimension, to a place where it was just us. Being able to share my compassion, made ​​me think about how much having learned Armenian was worth. Those days were difficult and sad too, but these memories always bring tears and a smile.

And it was the saddest thing, despite the pain, I felt peace and satisfaction knowing that he would have been proud of me, because the words that the Archbishop and his companions said about him, rightly or wrongly, I could understand. I understood that, like me, there were many people who saw him as that wonderful man, a tireless worker. And everything was said in Armenian, and I understood. I understood as I could.

Just want to share that learning the Armenian language for me is more than new words in my head… It is a bigger thing, because it made me closer to my grandparents. And of them only good things can arise. 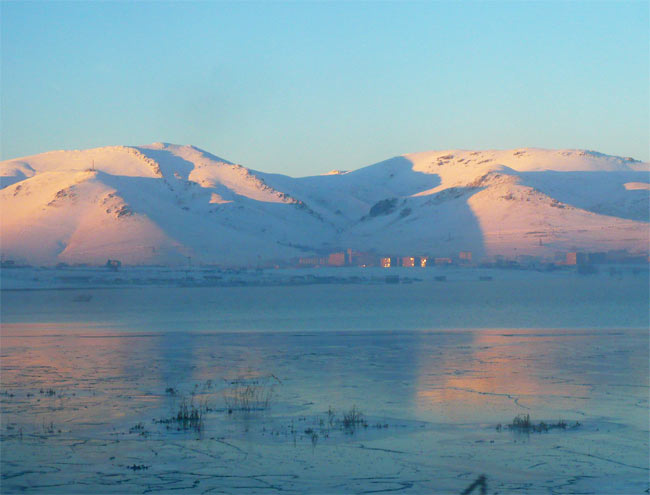 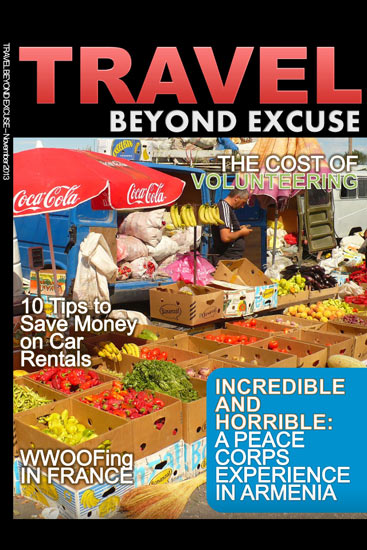 Subscribe to the Travel Beyond Excuse magazine on the Apple Newsstand at http://bit.ly/15FSA5N or sign up for our free newsletter and 30-days of FREE Travel Tip videos at http://www.TravelBeyondExcuse.com

The mission of Travel Beyond Excuse Magazine is to help those who wish they could travel find ways to work beyond their excuses for not traveling and enrich their lives by seeing the world. We do this by....

1. showing how affordable travel can be by teaching how to drastically reduce flight and lodging costs, and providing many other money-saving tips and resources
2. giving advice on traveling alone, with kids, and at any age, highlighting destinations you will love with great articles, photos and videos
3. providing ideas and inspiration for negotiating the time off that you need to travel to your dream destination (or otherwise showing ways to find time for travel)
4. teaching tips for increasing the enjoyment of travel through strategic language learning techniques, cultural awareness, packing strategies, health and safety tips, gear and gadget selection, and much more

Stepan Keshishian posted in November 11, 2013, in his blog, the 20 minutes video of Tamar Najarian's experience as volunteer in Birthright Armenia and as repart, plus Stepan has some good photos from Armenia.
http://hosank.wordpr...uthor/stepanos/