Jude was one of Jesus' 12 apostles chosen to spread the gospel. Also known as Thaddeus, he is said to have been born into a Jewish family in Palestine and, according to legend, he brought Christianity to Armenia. [Early Christians in Armenia were severely persecuted and some had to run in hiding for their life, like in the caves located near the present day Geghard (Armenian: Գեղարդ, meaning spear) monastery of Armenia, see comment at the end*]

The ancient St Thaddeus Monastery still exists in what is now northern Iran. Details of his life are scarce but it is believed that in about 60AD he wrote a letter to the persecuted churches of the East. In it he stressed the importance of persisting despite facing severe circumstances, as their forefathers had done before them.

He is said to have been martyred around five years later...[he is buried in that monastery of Iran].

St Jude is often displayed in pictures with a flame above his head to represent Pentecost, when he received the Holy Spirit with the other apostles.

He is now a popular choice for people who feel they need a beacon of hope in tough times; the saint to call on in seemingly impossible situations. Neil Lancefield

According to Armenian Church tradition, the Apostles Thaddeus and Bartholomew traveled through Armenia in AD 45 to preach the word of God; many people were converted and numerous secret Christian communities were established there.

The ancient Christian historian Moses of Khorene tell the following story, considered a legend by most modern historiography. Thaddeus converted King Abgar V of Edessa. After his death, the Armenian kingdom was split into two parts. His son Ananun crowned himself in Edessa, while his nephew Sanatruk ruled in Armenia. About AD 66, Ananun gave the order to kill St. Thaddeus in Edessa. The king's daughter Sandokht, who had converted to Christianity, was martyred with Thaddeus. Her tomb is said to be located near the Ghara Kelisa.

*The monastery of Geghard was founded in the 4th century, according to tradition by Gregory the Illuminator in a dead-end canyon with a running river at the bottom, in that canyon Armenian Christians used to take refuge in scattered caves from the persecuting authorities. The site is that of a main spring arising in a cave which had been sacred in pre-Christian times, hence one of the names by which it was known, Ayrivank (the Monastery of the Cave). The first monastery was destroyed by Arabs in the 9th century.
Nothing has remained of the structures of Ayrivank. According to Armenian historians of the 4th, 8th and 10th centuries the monastery comprised, apart from religious buildings, well-appointed residential and service installations. Ayrivank suffered greatly in 923 from Nasr, a vice-regent of an Arabian caliph in Armenia, who plundered its valuable property, including unique manuscripts, and burned down the magnificent structures of the monastery. Earthquakes also did it no small damage.

The Tale of Two monasteries

Today Echmiadzin, the original name was Vagharshapat, (located about 12 miles west of the capital, Yerevan, between the biblical mountains of Ararat and Aragats) remains at the center of Armenian spiritual life.

It is here that King Tiridates III of Armenia converted to Christianity in 301, the Emperor Constantine of Rome watching jealously the developments in Armenia put his empire on a similar path, just after ten years, preferring Christianity for the Roman empire over paganism, he said "if Armenia can do so we can" so goes the story and thus Rome owns its state religion conversion to Armenia, something that Vatican, in jealousy, is not quite admitting yet.

The conversion of the king of Armenia is credited to St. Gregory the Illuminator, who become the first patriarch of the Armenian Apostolic Church.

Living in Vagharshapat ( or Echmiadzin), the capital of Armenia at the time, Gregory reportedly had a vision. In the vision the skies parted and a ray of light blazed down, Jesus materialized from the ray of that light with a golden hammer in hand and struck the ground near the pagan altar located in a pagan temple, and suddenly as the result of that hammer blow a new altar-shaped structure appeared amid a column of fire with a cross shining above it. Jesus' message was: my house of teaching will triumphed over the pagan teaching. 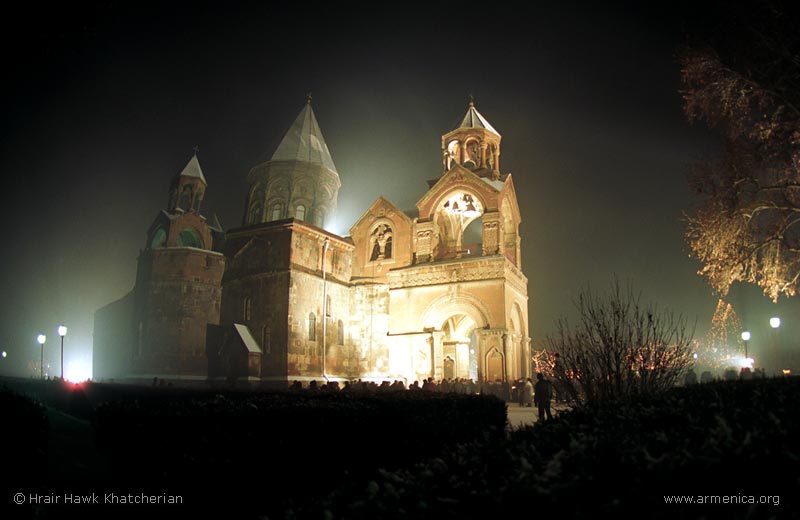 Today that pagan altar is in ruins below the cathedral of Echmiadzin and open to visitors. While Jesus' altar is 10 yards before the current erected altar, the faithful are supposed to kiss this old altar, made by Jesus, when going to church. When going out of the church it is suggested that they walk backward and never turn their back to the altar so that they will be blessed.

It was on that spot, over the destroyed pagan temple by the hammer of Jesus, that Gregory oversaw construction of the Cathedral of Echmiadzin; in Armenian "miadzin" means the Only Begotten [Son] and "ech" means the descend.

In late September, Armenian church leaders gathered here for a rare bishops’ conference. In that conference, Karekin II, who is the equivalent of the Armenian pope today, said: “We are an entire century behind the opportunity to modernize the church.”

How he did miss the mark. What is in need to do --IS GO BACK TO THE BASICS. To the original  teachings of Jesus in the gospels and throw OUT all the rest, all the accumulated teachings, rituals and practices of the Armenian Apostolic Church, throughout the centuries, that did not come from Jesus. For example, we see in  Echmiadzin services the faithful kissing small flags with pictures on them, this should not be so and should not be allowed, kissing the WORD of Jesus, or the Bible, is fine and OK but not kissing of religious flags because then someone puts his faith in a piece of cloth in place of the living Word of God. Kissing the cross is fine and OK but not after kissing it in the hand of the priest you believe the words of the priest saying: The church is your salvation or the church saves you; JESUS IS THE ONLY ONE WHO SAVES and not the church (now you why most churches in Western & eastern Armenia are in RUINS, this is a message from Jesus that churches and bulidings DO NOT SAVE, only HE CAN!) When they do this then Armenians will start flocking back to the services (today 98 percent of Armenians consider themselves Christians, but only 8 percent said they attended services at least once a week, this means Armenians are CULTURALLY Christians and not BIBLICALLY; that is, Armenian leaders should start thumping their fingers, as reference in "modernizing" the church, only to what is recorded in the Bible and not following the traditions of men mingled with some scriptures to alleviate their guilt and lack of knowledge of God or Jesus. Jesus destroyed the pagan temple at Vagharshapat, he did not tell to make a cocktail of His teachings & pagan teachings. This blasphemy would even make St.Thaddeus rise in protest from his grave from the monastery of his own name located in northern Iran.

The Photo below is that of the monastery of St. Thaddeus

Does the writer of the above know that "ananun"  means NO NAME. anonymous?

And we are expected to believe this as gospel truth?

It is estimated that Khorenatsi lived and wrote in the 5th c AD, and the Abcar fable is supposed to have happened 400 years before his time.

At least we hve physical evidence o Ani. Anyone know where Avarayr is?

The ancient Christian historian Moses of Khorene tell the following story, considered a legend by most modern historiography. Thaddeus converted King Abgar V of Edessa. After his death, the Armenian kingdom was split into two parts. His son Ananun crowned himself in Edessa, while his nephew Sanatruk ruled in Armenia. About AD 66, Ananun gave the order to kill St. Thaddeus in Edessa. The king's daughter Sandokht, who had converted to Christianity, was martyred with Thaddeus. Her tomb is said to be located near the Ghara Kelisa.

Oct.10.2011
Happy Birthday Echmiadzin!
October 10 marked the 2,696th anniversary [now 2,698] of the town of Echmiadzin, as residents who live in the town famous for the Holy See of the Armenian Apostolic Church celebrated in honor of their hometown:

In this video the pilgrimage to St. Thaddeus monastery is shown with an area full of tents:

The Saint Thaddeus Monastery is an ancient Armenian monastery located in the mountainous area of Iran's West Azarbaijan Province, about 20 kilometers from the town of Maku.

The church is annually the gathering place of Armenians of Iran and even neighboring countries on the occasion of an annual ceremony. On the week beginning July 22, Armenians from the cities of Tabriz, Uremia, Tehran, Isfahan, Qazvin, and… converge at Qara Kelissa church in groups or as a family.

In addition to Armenians, Assyrians and rarely Catholic families take part in the ceremony. One of the rituals held during the three-day pilgrimage is the baptism of Armenian children and youngsters because some believe baptism of their children at the first church of Jesus Christ and the martyrdom site of his apostles will bring blessings. Some parents also baptize their children with some vows and pledges and for this reason the age of those being baptized sometimes reaches 15 to 20.

One of the 12 Apostles, St. Thaddeus, also known as Saint Jude, (not to be confused with Judas Iscariot), was martyred while spreading the Gospel. He is revered as an apostle of the Armenian Apostolic Church. Legend has it that a church dedicated to him was first built on the present site [of the St.Thaddeus Monastery] in AD 68.

The ancient Christian historian Moses of Khorene tell the following story, considered a legend by most modern historiography.

Thaddeus converted King Abgar V of Edessa. After his death, the Armenian kingdom was split into two parts. His son Ananun crowned himself in Edessa, while his nephew Sanatruk ruled in Armenia. About AD 66, Ananun gave the order to kill St. Thaddeus in Edessa.

The king's daughter Sandokht, who had converted to Christianity, was martyred with Thaddeus. Her tomb is said to be located near the Ghara Kelisa [or the monastery].

According to Armenian Church tradition, the Apostles Thaddeus and Bartholomew traveled through Armenia in AD 45 to preach the word of God; many people were converted and numerous secret Christian communities were established there.
More at: http://www.horizonwe...s/details/31693
February 14, 2014
IRAN REVIEW
Firouzeh Mirrazavi