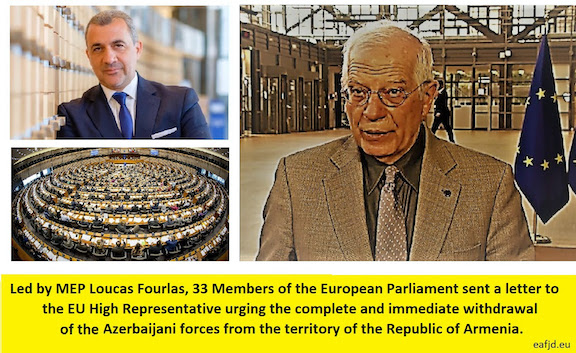 BRUSSELS—At the initiative of European Parliament member Loucas Fourlas, 33 European lawmakers addressed a letter to the EU High Representative Josep Borrell regarding the attack by Azerbaijani Armed Forces on the sovereign territory of the Republic of Armenia on November 16.

The lawmakers condemned Azerbaijan’s aggression and demanded that the Azerbaijani armed forces immediately and completely withdraw from the territory of the Republic of Armenia. They also urged the EU External Action Service to put pressure on Azerbaijan to stop and prevent the violation of the territorial integrity of Armenia.

“Unlike the EEAS’s declaration, the letter of the MEP’s clearly calls the aggressor by its name. The EU needs to put pressure on Azerbaijan with concrete measures, in order to ensure the immediate and complete removal of the Azerbaijani Armed Forces from the sovereign territory of the Republic of Armenia,’’ said EAFJD President Kaspar Karampetian, who also welcomed the initiative by the European lawmakers.

On Friday, the President of the European Council Charles Michel announced that at his request, the leaders of Armenia and Azerbaijan will meet in Brussels next month on the margins of the Eastern Partnership summit.

The complete text of the letter is below.Read More: