Can someone please convert this to text?

And here is Vahagn.

Let us listen to Khorenatsi as he describes him.

Of the pipe(reed) smoke arose
Of the reed red flame arose
And of this flame ran the fair youth.

He had hair of fire,
His beard was of flame,
And had eyes each a sun.

The translation I have translates "erkner" as
turbulent". I must differ linguistically if not in
spirit, as "erkner" is based on the word "erkunq",
birth, parturition, i.e. one becoming two,
erku/erkunq. I would have translated it as;
Heavens become two, earth becomes two, and so does
the sea of tsirani, whereby Vahagn is born of the
heavens, the earth and the sea.

Let us dwell on the "hair of fire" description.
Gavoukjian in his Armenia Subartu and Sumer has this to say.
I'll make this as concise as possible since we have already seen the counter argument about Vahagn having derived from Verethragna. He argues the fact that it would take a stretch of imagination and much scriptural gymnastics to derive Vahagn from Verethragna, even if many of the letters are common to both, and even if in time the characters of have converged just as Vahagn has been compared to Hercules. Remember that Vahagn just as Hercules could fly as we know from the legend of Hart Goghi Janaparh.
After much debate and evidence Gavoukjian concludes that Vahagn is none other than the Armenian Vulcan, god of the volcano. Compare the two words vahagn/vulcan and then compare it to verethragna. The former takes much less scritural gymnastics to conform. I would be amisss to not mention that the Arabic word for volcano is "burkan".
let's read again the above poem and see why Vahagn was described as being born of the smoke of flame emanating from a pipe, volcano. Did Armenians know about volcanoes? We have lived in the shadow of one the world's most famous volcanoes, Masis/Ararat, even if it has been quiet for quite some time.
A very interesting tidbit by Gavoukjian is that Hercules wife/consort was Hebe and that of Theishba was Huba. He concludes that both of these words have something common with Arabic word "hub", love. And that the consort/wife/lover of Vahagn was Astghik who in her own right was the godess of love and beauty. Another interesting tidbit is that the first syllable of the name of Vahagn, i.e. "vah" means fire/ flame and the author gives this as proof; That in Van the morning after the weddings the bride the groom and the entire party would climb on the roof and welcome the sunrise with the chant:
Eg barev, ay eg barev,
Egn arevun tan1 barev,
Ta tagavorin shat arev,
Vahe~, vahe~
Eg barev, ay eg barev,
Egn arevoun tanq barev,
Ta taguhun shat arev,
Vahe~, vahe~

Here vahe is interpreted as "flame", we also know that some pagan temples were called VaheVahyan.

Note; In Armenian the consort/wife/lover of a god is known as "bambish".

Hers is another look at Vahagn.

Supreme god of war, bravery and victory of the ancient Armenian mythology.
Some sources describe him as the Sun-god. In an ancient manuscript we read; (Armenian) worshipped the Sun and called Vahagn//զԱրէգակն պաշտեցին եւ Վահագն կոչեցին. According to Anania Shirakatsi his name is connected to the legend of Hardagoghi JanaparhՀՀարդագողի* Ճանապարհ/ or the Milky Way GalaxyԾիր Կաթին which in some sources is also described as Aregakan Hin Janaparh/Արեգական Հին Ճանապարհ. In ancient mythological wrirings Vahagn is also described as the embodiment of the four elements of nature- heave,n/erkinq, of earth//hogh, wind,qami//hov, water/Tsirani Tsov, and fire-Shikakarmir Yeghegn/fiery red reed, with his fire colored hair, fiery red beard, and sun- bright eyes.

Here is where we talked about the Hard Goghi Janaparh.
Can someone please expand it?
How about you Harut? Can you write an epic poem about Vahagns faster than a speeding bullet superman exploits?

I am sure they also told you that the aragil/stork brings the babies and why the Milky Way Galaxie, the Tsir Katin is better known as Hardagoghi Janaparh.
For those who don't know that;
Legend is there was famine in Armenia, men, women, children and animals were starving to death while there was plenty to eat in Assyria. So Vahagn went to to steal some hay. He was detected and to avoid being caught he leaped one big jump and flew back to Armenia. In so doing he spilled some of the "hard/hay" leaving a streak in the sky which to this day is known as the "Hardagoghi Janaparh" (Trail of the Hay Thief). Of course the English name, the Milky Way has its own legendary story.

Was Weehawken, NJ named for Vahagn?

Above we see that some aver that Vahagn is the Armenian variant of Vulcan.
See how many times "fire and smoke" are mentioned in the above poem about the Birth of Vahagn

Beside Vulcan being the god of fire, he was also the “patron saint” tradesmen, primarily the metalworkers. 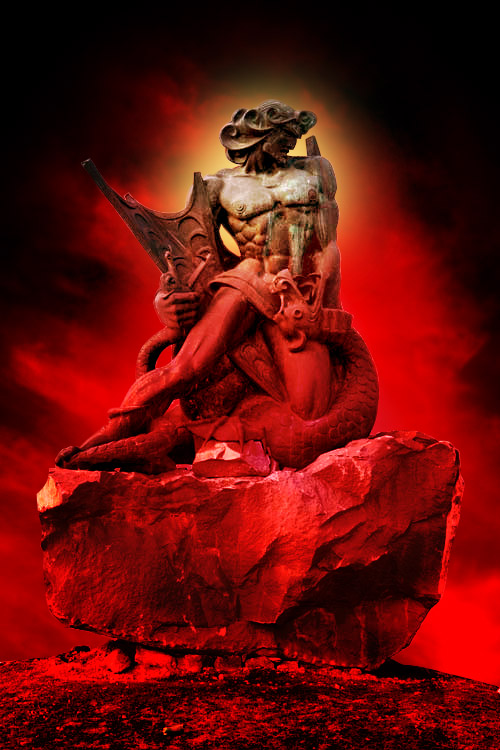 I don’t know much about this writer ԳԵՎՈՐԳ ՅԱԶԸՃՅԱՆ, even though I have seen his articles at other times.
As you can see he uses quite powerful and provocative language directed to not only the government but also to the church. It only shows how little our hierarchy, be they temporal or religious know about our culture and history. That, even today there are so called Aryans** who still observe it. He points out, when Nowruz having nothing to do with islam, it is being celebrated in the muslim land azboobistan/alievistan.
Btw. Nowruz literally means New Day, Նոր Օր The Armenian Նաւասարդ/Navasard means New Year/Նոր Տարի/ Ամանոր, August 11 by the Armenian Calendar.
**Which is worse? The so called Armenian Aryans or those ragtag alien cults?
-----
Perversion of History

**Which is worse? The so called Armenian Aryans or those ragtag alien cults?