When Paul Ignatius first stepped aboard a Navy ship, he was anxious.
Japan had already attacked Pearl Harbor and the war in the Pacific was
going strong.

He would go on to have a distinguished career that would eventually
see him serve as Secretary of the Navy. But never did Ignatius expect
that one day, the Navy would name a new missile destroyer, the
backbone of the fleet, after him, though the ship has not yet been
built, Glendale News-Press reported.

Earlier this week, the 92-year-old stood before top military brass at
a Pentagon ceremony as the Secretary of the Navy named the newest
Arleigh Burke-class destroyer - a 509-foot long ship known as the
workhorse of the fleet that can fight air, surface and underwater
battles simultaneously - USS Paul Ignatius.
Ignatius said he was overwhelmed.

"It's a great honor," he said by phone from Washington, D.C."I didn't
expect it."

The descendant of Armenian immigrants, Ignatius was commissioned in
the Navy in June 1942. He had just started studies for his MBA at
Harvard Business School after graduating from USC. He would spend four
years as a naval officer before returning to school.

During his service, he participated in the Battle of Leyte Gulf,
considered one of the largest naval battles of World War II. Fought
near the Philippine Islands, Ignatius saw two kamikaze pilots -
Japanese military aviators who crashed into targets on suicide
missions - slam into the USS Manila Bay during the battle.

"We managed to save the ship and survive," Ignatius said. "I loved the
Navy and I loved the responsibility that I had on the ship."
After completing his studies at Harvard, he became a professor there.
With two colleagues, he later started a consulting company that dealt
with several defense projects, including the Polaris missile, a
nuclear weapon.

"Because of that experience over a 10-year period, I knew quite a lot
about the Defense Department," Ignatius said.
And then in 1961, then-Secretary of Defense Robert McNamara offered
Ignatius a job as assistant Secretary of the Army. Ignatius hit it off
with McNamara - also from California and a Harvard alum - early and
quickly became one of his principal assistants.

Ignatius spent eight years in the Pentagon, the final two as Secretary
of the Navy. It was a tumultuous time that included the Cuban missile
crisis, the North Korean capture of a US intelligence-gathering ship,
and the Vietnam War, which Ignatius said will remain a point of
controversy "until the end of time."

Ignatius set the standard for what secretaries of the Navy should be,
Ray Mabus, who currently holds that title, said at the naming ceremony
Tuesday.

Ignatius served under presidents John F. Kennedy and Lyndon B.
Johnson. After leaving government service, he went on to become
president of the Washington Post, and later, chief executive of the
Air Transport Assn.

He now spends his retirement sitting on various philanthropic boards
that focus on at-risk youth.

"There are sailors who will sail on the Paul Ignatius who have not yet
been born today," Mabus said during the ceremony before unveiling
another surprise for Ignatius: hats embroidered with the ship's name
for him and his family members.

It typically takes years for Navy ships to be built, but Ignatius
hopes to one day board his namesake.

"I've got to talk to my doctor to be sure to keep me going because I
want to be around when she's complete," Ignatius said.

Paul Ignatius as Student Body President at Hoover High... (Courtesy
of the...)

Glendale native Paul Ignatius, retired Secretary of the Navy, will
be honored at this year's Glendale Educational Foundation event as
a distinguished Hoover High alumnus.

Born in 1920, Ignatius grew up on Columbus Avenue in a Spanish-style
house with a red tile roof and five apricot trees in the backyard;
a reminder of a time when the entire area was covered in orchards,
he wrote in his memoirs, published in 2000.

He started school at Field Elementary -- a long walk, he recalled. Then
Keppel opened in 1928 and he walked there with neighborhood friends.

Not only did Ignatius attend Eleanor J. Toll Junior High, the woman for
whom the school was named lived across the street on Columbus Avenue.

Growing up, he gave little thought to his Armenian heritage.

"There were no Armenian kids in our school except us," he said of
himself and his siblings. Nor could he speak the language. It wasn't
until much later that he focused on his family's history and learned
that both parents, Elisa Jamgochian and Hovsep Ignatius, were born
in Armenia.

His maternal grandfather, Avedis Jamgochian, brought his family,
including Elisa, to England in 1893 and they prospered there, but
had to leave for health reasons.

They came to California in 1911. Jamgochian built a large house in
Tropico and eventually invested in a soap factory, along with other
business ventures. Elisa befriended a young photographer, Edward
Weston, and gave him one of his first exhibits, "a small affair for
family and neighbors."

Ignatius' father was 19 when he came to the United States in 1904,
directly from "the old country," with his three brothers. They
settled in Pittsburgh, where they dropped the patronymic "ian" from
their names.

When H.B. Ignatius, as he was later known, attended a Shriners'
Convention in Los Angeles in 1912, he looked up Jamgochian, well
known for writing letters and poems in Armenian newspapers published
in the United States. He was introduced to Elisa, decided to move to
Glendale and they married a few years later.

During the aftermath of the massacres of 1915, H.B. Ignatius was asked
to join the Near East Relief Committee, "the only Armenian in this
distinguished group," his son wrote. "Of all his many fundraising
activities, this one gave him the most satisfaction." 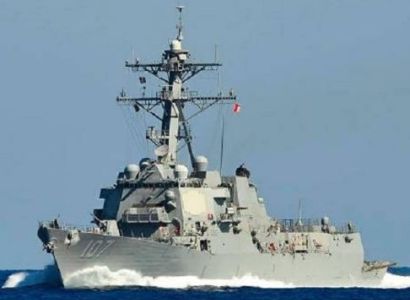 The command of the US Naval Forces will name its new warship (Arleigh Burke-class guided missile destroyer) in honor of the famous American military figure of Armenian origin Paul Robert Ignatius (Ignatosian), the official website of the US Defense Department reported.

According to the source, the ship’s official name will take place on July 27 at the port in Fort Lauderdale, Florida.

According to the secretary of the US Navy, Richard Spencer, the new warship will expand the capabilities of the air, underwater, surface, strike and anti-ballistic missile defense

"The future USS Paul Ignatius stands as proof of what the teamwork of all our people - civilian, contractor and military - can accomplish together," said Spencer. "From the start of the acquisition process, to the keel laying and christening, to today’s commissioning and the many missions she will fulfill going forward, this destroyer enhances our capabilities for air, undersea, surface, strike and ballistic missile defense.”

Paul Robert Ignatius was born in the city of Glendale, California, in the family of Armenian émigrés Hovsep and Eliza Ignatosian. Paul Robert Ignatius, who served in the U.S. Navy during World War II, and later during the Lyndon B. Johnson administration as assistant secretary of defense for installations and logistics from 1964 - 1967, and secretary of the Navy from 1967 - 1969.