4347), the Armenian National Committee of America (ANCA) has set
Tuesday, June 24th as a day for Congressional calls and social media
activism in support of this bipartisan religious freedom measure,
ANCA reports. Call to Action in support of H.R. 4347

"This Tuesday, please call, post, tweet, and share your support for
Turkey's return of stolen Armenian, Greek, Syriac and other Christian
churches," said ANCA Executive Director Aram Hamparian. "Let your
legislators know you expect them to work for the passage of H.R.4347,
and then take two minutes to tell your friends and family that
you're taking a stand for the bipartisan Turkey Christian Churches
Accountability Act."

The ANCA is asking all supporters of religious freedom to contact their
legislators to support H.R.4347, and then to find creative ways to use
the hashtag #ReturnChurches in their Facebook, Twitter and other social
media posts. A sample phone script and relevant contact information
for legislators is available at http://www.anca.org/returnchurches.

The U.S. House Committee on Foreign Affairs, under the leadership of
Chairman Ed Royce (R-CA), is set to consider H.R. 4347, the Turkey
Christian Churches Accountability Act, on Thursday, June 26th at 9:00
am EST. The freedom of faith initiative is stridently opposed by the
Turkish Government.

Introduced this March of this year by Chairman Royce along with the
panel's Ranking Democrat Eliot Engel (D-NY), H.R. 4347 would require
that the U.S. Department of State formally report to Congress on an
annual basis about the status of Turkey's return of stolen Christian
churches and properties in Turkey and occupied Cyprus. H.R. 4347
builds on a measure (H.Res.306), spearheaded by Chairman Royce and then
House Foreign Affairs Committee Ranking Democrat Howard Berman (D-CA),
which was overwhelmingly adopted by the House of Representatives on
December 13, 2011. That resolution set the groundwork for H.R.4347
by calling upon the government of Turkey to honor its international
obligations to return confiscated Christian church properties and to
fully respect the rights of Christians to practice their faiths.

On Dec 13 2011, U.S. House passed H.Res. 306: Urging the Republic of
Turkey to safeguard its Christian heritage and to return confiscated
church properties. In summer of 2011, the U.S. House Committee on
Foreign Affairs paased the resolution with 43 votes "for" and 1 vote
"against." In March 2014, a similar resolution (H.Res 180) was passed
under pressure of the Greek lobby.

“Americans of Armenian, Greek and Assyrian heritage – the descendants of those subjected to genocide by Ottoman Turkey from 1915-1923 and whose churches continue to be held captive by the Turkish Government – join with friends of all faiths in welcoming Committee passage of the Royce-Engel Turkey Christian Churches Accountability Act,” said ANCA Chairman Ken Hachikian. “The adoption of this measure sends a strong signal to Ankara that it must stop its anti-Christian conduct and start coming to terms with its moral, material, and legal obligations to Armenians, Syriacs, Cypriots, Pontians, and other victims of Turkey’s still unpunished genocidal crimes.”

Introduced in March of this year by Chairman Royce along with the panel’s Ranking Democrat Eliot Engel (D-NY), H.R. 4347 would require that the U.S. Department of State formally report to Congress on an annual basis about the status of Turkey’s return of stolen Christian churches and properties in Turkey and occupied Cyprus. H.R. 4347 builds on a measure (H.Res.306), spearheaded by Chairman Royce and then House Foreign Affairs Committee Ranking Democrat Howard Berman (D-CA), which was overwhelmingly adopted by the House of Representatives on December 13, 2011. That resolution set the groundwork for H.R.4347 by calling upon the government of Turkey to honor its international obligations to return confiscated Christian church properties and to fully respect the rights of Christians to practice their faiths.

To me this is totally illogical move on the part of Americans. Really! It is much more suitable for a country like Russia to get involved in such issue; moreover it is about preservation of mostly orthodox churches, or whatever has left of them. But Russians are notoriously clumsy and very good in mimicking to care rather than being genuine in anything of concern to their perceived allies. Most of these churches were erected thousand of years before barbaric turks arrived in Asia Minor. Turks have been given license from the very same Americans to destroy everything reminding the presence of native Armenians on the territory of the American project called "Turkey". If the measure is directed to soften the hearts of the Greeks, Armenians, Assyrians, etc., towards the "brave and the bold", it won't work that way. If the measure is meant to show the world how Americans care about religious freedoms...come now, how about Saudi Arabia?

To me this is total non-sense.

TURKEY LASHES OUT AT CONGRESS OVER CHRISTIAN CHURCHES BILL

Legislation requiring the State Department to report on the status
of "stolen, confiscated or otherwise unreturned" churches and other
Christian properties in Turkey and northern Cyprus sailed through
the House Foreign Affairs Committee on a voice-vote June 26. Turkey
wasted no time in denouncing what it called the bill's "groundless
criticism, false information and baseless accusations" and accused
lawmakers of caving to ethnic lobbies.

"Attempts by anti-Turkish circles in the US Congress, driven by
domestic political considerations, to push such unconstructive and
baseless initiatives are unacceptable," the Turkish Foreign Ministry
said in a statement carried on the website of the Turkish Embassy
in Washington.

The harsh statement raises concerns that the legislation could
complicate relations with Turkey at a time when the United States is
relying on its NATO ally to defuse the crisis in Syria and contain
the Islamic State of Iraq and al-Sham (ISIS).

"Apart from being null and void as far as Turkey is concerned,
such initiatives are also incongruous with the existing spirit
of partnership and alliance that we enjoy with the United States,
with whom we aim to be in even closer cooperation and solidarity,
especially in confronting the regional and global challenges we are
faced with," the statement reads. "Those within the US Congress who
lead such irresponsible acts and their supporters damage not only
the Turkey-US bilateral relationship but also their own country's
interests. It is our strong expectation from the US Administration
to pronounce a clear position on this irresponsible act which runs
counter to our bonds of alliance. Similarly, we expect from all those
who value the Turkish-US relationship to not remain silent."

The legislation, sponsored by committee Chairman Ed Royce, R-Calif.,
and ranking member Eliot Engel, D-N.Y., would require the State
Department to inform Congress of its efforts to persuade Turkey to
return Christian sites and objects to their "rightful owners."

It also requires that information to be made a part of annual reports
to Congress on human rights practices and international religious
freedom.

"I have long been concerned that Christian heritage sites in Turkey
have been deteriorating and disappearing in the face of hostile
government policies," Royce said in a statement after the mark-up.

"Despite optimistic claims by Turkish leaders, a majority of religious
properties remain unreturned. There is even legislation before the
Turkish Parliament to convert the landmark Hagia Sophia in Istanbul
from a museum to a mosque. The U.S. must hold Turkish leaders to their
promises. By passing this legislation, the U.S. sends a message to
Turkey that it must return church properties to their rightful owners,
while providing an objective measure of their progress each year."

The legislation has the strong support of the Armenian-American
diaspora, which is centered around greater Los Angeles and the New
York metro area. Armenian church leaders from Washington and New York
attended the June 26 mark-up and the Armenian Bar Association wrote
to all 45 members of the committee urging them to vote "yes."

"Ottoman Turkey's genocide of the Armenians took a huge and horrific
human toll. We know that and you know that. Less known is the fact
that there were a few lucky survivors of the Genocide which remain
upright today on the land where so many Armenians were felled,"
the letter states. "The surviving Armenian and Christian churches
are witness to an ancient native civilization, lost for now, but
deserving of the dual destinies of recovery and return."

"I am fearful that in our haste to make a statement that provides
understandable comfort to our constituents, we are going to rupture
one of the most important bilateral relationships we have right now,"
said Connolly, who co-chairs the Congressional Caucus on US-Turkish
Relations and Turkish Americans.

Connolly instead offered a non-binding sense of Congress that Turkey
should "continue to make progress" in returning Christian properties.

Royce said he was "disappointed" not to get unanimous support after
rewriting the bill to highlight recent encouraging steps by Turkey,
including the creation of a legal process for considering claims,
reports that more than 300 properties were returned as of January 2014
and the decision to allow a liturgical celebration at the historic
Sumela Monastery in 2010 for the first time since 1922. Royce pointed
out that the Barack Obama administration has raised similar concerns
at the highest levels and questioned how much blowback there would
really be to a congressional report.

If only to point out the property theft. Why not?

Return of property? Definitely they are listening and obeying (not). Look at this article!

PanARMENIAN.Net - The Istanbul court rejected lawsuit filed by
the Armenian Patriarchate of Constantinople for the return of the
historical Armenian property, Sanasarian building to the Patriarchate,
lawyer Ali Alibeyoglu told Hurriyet daily.

No clear reasons were provided behind the rejection, with well-founded
arguments refused to be considered, the lawyer said.

According to Alibeyoglu, the court ruling will be appealed against,
with a petition to be filed to the European Court should a necessity
arise, according to Panorama.am.

Armenian benefactor Mkrtich Sanasarian initiated construction of
the building in 1895. Ownerships rights to the building belonged to
Sanasarian Foundation, with Armenian Patriarchate made responsible
for the Foundation management. 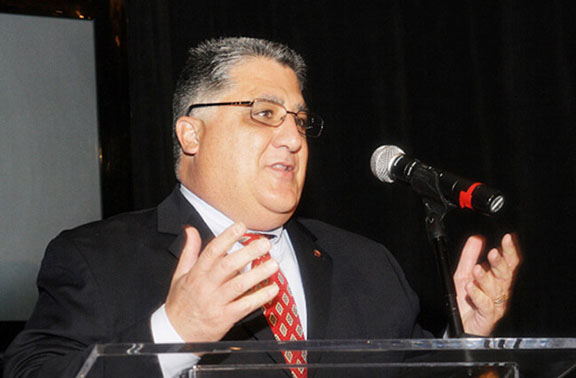 SACRAMENTO—Senator Anthony J. Portantino (D – La Cañada Flintridge), Chair of the Senate Select Committee on California, Armenia and Artsakh Mutual Trade, Art and Cultural Exchange, introduced Senate Resolution 29 on Monday designating the month of April for commemoration of the Armenian Genocide. The Resolution also calls on the Republic of Turkey to return confiscated church properties to their rightful congregations.

In addition to genocide denial, religious discrimination and intolerance remain serious issues in the current Republic of Turkey. Discriminatory laws are still used to justify the confiscation of church property and prevent free worship. The U.S. Commission on International Religious Freedom noted in its 2011 report that the Turkish government continues to impose serious limitations on freedom of religion or belief, thereby threatening the continued vitality and survival of minority religious communities in Turkey.

The Armenian Church has taken important steps to restore ownership to its religious sites within Turkey. In 2015, a lawsuit was filed with Turkey’s highest court seeking the return of the church’s headquarters, a sacred site in the south-central city of Kozan, which was confiscated in 1915 by the Ottoman authorities.

“Although the Californian Legislature has recognized and commemorated the Armenian Genocide, our research shows that the issue of church property has yet to be included in a resolution that passed a house of the legislature. Religious discrimination anywhere is against common human values,” commented Portantino. “I join with many historians who believe that historical Armenian churches represent the cultural heritage of the Armenian nation and should be returned to their rightful owners to be cherished and used for appropriate religious purposes,” concluded Senator Portantino.

Back to Events & Action Alerts