The Huffington Post has published an old ad of coffee dating back to
1650s, which is exhibited at the British Museum in London.

Originally he was brought to London as a servant by the merchant
Daniel Edwards. Rose served coffee each morning to Edwards' house
guests. Curiosity about the new drink soon spread through Edwards'
friends, and the number of his visitors steadily grew over time.

There was so much excitement that Edwards eventually decided to
financially assist Rose in opening a coffeehouse at St. Michael's
Alley in Cornhill.

The Huffington Post has published an old ad of coffee dating back to
1650s, which is exhibited at the British Museum in London.

Originally he was brought to London as a servant by the merchant
Daniel Edwards. Rose served coffee each morning to Edwards' house
guests. Curiosity about the new drink soon spread through Edwards'
friends, and the number of his visitors steadily grew over time.

There was so much excitement that Edwards eventually decided to
financially assist Rose in opening a coffeehouse at St. Michael's
Alley in Cornhill.

I recall reading this in some book ... I think it was a culinary book about the history of coffee and chocolate.
Pascal was apparently the first purveyor of coffee in Paris as well -


"The first public sale of coffee in Paris was at the fair of St. Germain de Pres and the first Parisian entrepreneur of coffee was probably Pascal, an Armenian. He sold coffee at the fair in 1672, and when it closed he opened a small coffee shop. But his clientele on the Quai de LEcole was fonder of wine and beer. He closed that establishment departed to London."

And this is what wiki states -

The first coffeehouse in London was opened in 1652 in St Michael's Alley, Cornhill. The proprietor was Pasqua Rosée, the servant of a trader in Turkish goods named Daniel Edwards, who imported the coffee and assisted Rosée in setting up the establishment in St Michael's Alley, Cornhill.[9][10] By 1675, there were more than 3,000 coffeehouses in England.[11] Pasqua Rosée also established Paris' first coffeehouse in 1672 and held a city-wide coffee monopoly until Procopio Cutò opened the Café Procope in 1686.[12] This coffeehouse still exists today and was a major meeting place of the French Enlightenment; Voltaire, Rousseau, and Denis Diderot frequented it, and it is arguably the birthplace of the Encyclopédie, the first modern encyclopedia.

Here's an old coffee ad that's really vintage. This pamphlet -- on display at the British Museum in London -- dates to the 1650s.

Boing Boing brought our attention to the seriously retro advertisement, which was created by the first coffee shop in London, in St. Michael's Alley, Cornhill.

The shop was run by an Armenian by the name of Pasqua Rose, who came to London by way of Paris, and sparked a coffee revolution in his newfound city.

An excerpt from the pamphlet reveals how it was made, which seems not so different from modern preparations:

It is a simple innocent thing, composed into a drink, by being dryed in an Oven, and ground to Powder, and boiled up with Spring water, and about half a pint of it to be drunk, fasting an hour before and not Eating an hour after, and to be taken as hot as possibly can be endured; the which will never fetch the skin off the mouth, or raise any Blisters, by reason of that Heat.

Read the ad for yourself below.

and how do we know that pasqua rosee was armenian?

Rosee, Pasqua (fl. 16511656), coffee-house keeper, was probably born into the ethnic Greek community in Ragusa, Sicily, in the early seventeenth century. By 1651 Rosee had moved to Smyrna in the Ottoman empire, where he made the acquaintance of Daniel Edwards, an English Levant merchant who had acquired a taste for coffee. As a non-Muslim Levantine, Rosee was well placed to serve as an intermediary between English merchants and the Ottoman Turks, and it is likely that he began to work for Edwards in this capacity in Smyrna.

Czech Republic - May 19 2022
How an Armenian Opened the First Coffeehouse in Prague
BYPRAGUE MORNING
MAY 19, 2022

Do you ever wonder where the first cup of coffee was in Prague, or how it even got there? The first Europeans to get acquainted with coffee were mostly travelers.

He was a Czech nobleman, traveler, humanist, soldier, writer, and composer. He joined the Protestant Bohemian Revolt in the Lands of the Bohemian Crown against the House of Habsburg that led to Thirty Years’ War. He discovered coffee on his journey to Constantinople in 1598.

Following the victory of Catholic forces in the Battle of White Mountain, Harant was executed in the mass Old Town Square execution by the Habsburgs.

History of Drinking Coffee in the Czech Republic

No one could even imagine that one day, a penniless but resourceful Armenian would make coffee accessible to everyone, also teaching people the right way of coffee drinking.

Many Czechs didn’t even realize the real purpose of the coffee beans that were sold at pharmacies for unthinkable prices, instead being assured that the beans were an effective means to fight indigestion.

Their unawareness could remain for a very long time if not for one enterprising Armenian named Georgies Deodatus. This quite unusual name was given to him in 1699 in Rome after he adopted Catholicism. As for his homeland, he was born in Syria.

In the early 18th century, Georgies arrived in Prague, having passed a long way. It was worth it though as he would eventually reach success, opening the first coffeehouse in the city. At first, penniless Georgies was strolling the streets of the city disguised as a Turk. He carried a small stove with him to make coffee on the go and sell it in small cups. 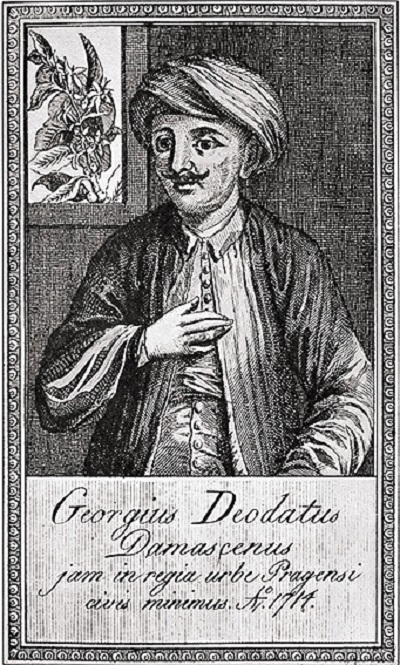 This small affair soon turned into a successful business. The Armenian merchant settled in Prague, married, and began to consider opening a permanent café in the city. In 1707, he received permission to open a coffeehouse, and in January 1708, he established the first public café in the country in a house named “U zlatého hada” (“At the golden snake’s place”) now located on Karlova St in the Old Town of Prague.

The before-unseen kind of a store immediately grabbed the attention of the locals. Georgies’ café was so popular that many of its visitors were drinking coffee outside the shop due to the huge number of buyers. Prague got addicted to coffee.

After the passing of Georgies, his coffeehouse for a short time provided his family with considerable earning. But in a year, the café would be closed down. One might consider that it was the end of the entrepreneur’s story. However, the legend of Georgies is one of the most known legends of Prague.

Everyone knows that he has been an Armenian, but alas, his real name is known to none. Today, the building that used to accommodate Georgies’ shop houses a café also named “U zlatého hada”. The coffee of Georgies Deodatus even occupies an honorary spot in its menu.