How Could Such Beauty Be Left Behind?

How Could Such Beauty Be Left Behind? Zabelle Panosian was 23 years old and the mother of a 6-year-old girl when she recorded just 11 sides for the Columbia Record Company in 1916-17. Of those, she recorded one that, to this day, takes the breath away of those who are fortunate enough to hear it, across nationalities and languages. Her “Groung” (“Kroonk” in modern transliteration) is among the most stunning vocal performances made in the United States or elsewhere, and likely among the best-selling performances of Armenian-language music before World War II. And yet, little is known of the artist responsible for it.

Born in Bardizag (present-day Bahçecik, Turkey) on June 7, 1891, she emigrated to the U.S. in April 1896 and married the photo-engraver Aram Sarkis Panosian, 12 years her senior. She lived in Brookline, Mass., from 1908 until at least 1920. She is said to have toured with the great tenor and student of Komitas Vardapet, Armeneg Chah-Mouradian, in the late 1910’s to raise funds for Armenians. She was in Washington, D.C. in February 1920 at a benefit for the Near East Relief Campaign. She applied for a passport that same year, at age 29, to visit France to study, to Italy to see her brother, and to England and Egypt to “locate lost relatives.” Her application gives her height as 5’5″, her mouth as “medium,” chin as “round,” hair as “dark,” face as “round,” and nose as “straight.” 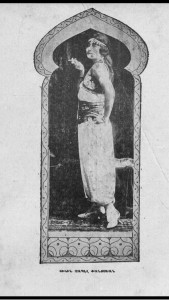 Robert Karayan has noticed that she was profiled, in photo only, in an edition of “Hai Guine” (Armenian Woman), the first feminist bi-monthly journal of Istanbul, founded, published, and edited by Hayganouche Mark from 1919-33. Panosian and her then-14-year-old daughter returned through Ellis Island two and a half years later on Jan. 23, 1924, from the port of Cherbourg, France, to her husband at 520 E. 183rd St. in Manhattan. A few years later, she made another trip with her daughter Adiena (or Adrina), then still single at 22, and returned to New York through Gibraltar.

And that, for the moment, is where her story seems to leave off. She died in 1986. However, I own two copies of her sublime masterpiece, and each are totally different takes—in different keys and one featuring bird-sound effects. Both are identical in every way visually, with the same catalogue and matrix numbers stamped into the shellac discs. Why would two different takes exist that appear to be identical? My theory, and it’s only a theory, is that Columbia sold so many copies of it that they wore out the original metal parts—the “stampers,” they’re called—and had to revert to an unissued “take” of the performance to keep up with demand for the recording. I do not know which is the first take released, and I do not know at present whether there is a third take in circulation. The recording stayed in print from its 1917 release until Columbia records deleted its Armenian-language recordings in 1931. And why would they have to keep a performance of a classically trained Armenian-language performance in print for more than a decade? Why would it have been so popular? For two reasons, I think. First, because the performance is so incredibly powerful. And second, because the lyrics, speaking to the loss and bewilderment and frustration of the Armenian-American Diaspora, were expressed so clearly to its listeners.

“Crane, where are you coming from? I am servant of your voice. Crane, have you not news from our country? Hasten not to your flock, you will arrive soon enough! ”

And yet, for nearly a hundred years, nothing has been written about this great artist and performer. It is, to me, amazing and terrible. It speaks to the core of not only the American or the Armenian but the human question: What is the nature of remembering? How could such a beautiful thing be left behind?

You can hear Zabelle’s “Groung” here: