Armenian archaeologists unearthed an ancient, 8000-year old settlement near the Aknashen city in the Ararat Valley. It dates back at the beginning of the human civilization.

“Prior to this period, everything known mostly relates to cave shelters and temporary dwellings. But here, we deal with a sedentary settlement, which is remarkable for its first attempts of construction and ceramic production,” said Ruben Badalyan, the head of the expedition.

In Aknashen, the archaeologists found a plethora of artifacts. Among poor-condition human remains, they unearthed jewelry, ceramics, clothes, and tools, which provided the researchers with invaluable data on the lifestyle of the people, who have probably been the first to discover civilization.

“It could be concluded that the humans living in that territory had some sense of aesthetic beauty. They adorned themselves, their clothes, and tools. And there is evidence that they used make-up,” said Badalyan.

During the past years, several expeditions have already presented the archaeologists with monuments dating at the 7th and 6th millennium BC.

I know that place ~ off to the left (still under the soil) is where long, long removed cousin Garo lived ~ you remember talk of Garo ~ loved to ride horses, was good with a bow ~ and made a real good wine ```

Don't let the baboons see this article, they still believe in their own lie that these lands belong to them, losers. 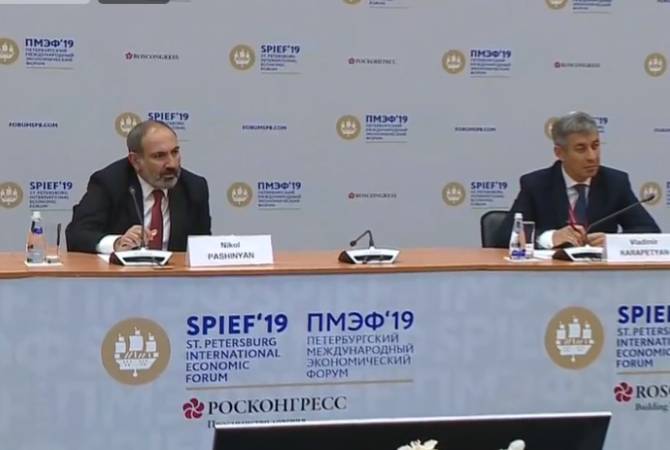 The Armenian PM told the Azerbaijani reporter that the Governments of Armenia and Artsakh are ready to install mechanisms investigating incidents on Artsakh-Azerbaijan contact line.

“In order we avoid the disputes about who, where and when fired, it’s necessary to discuss the agreements reached still back in 2016 in Vienna. I am about the mechanisms investigating incidents in the conflict zone”, Pashinyan added.

Referring to the issue of ARSENAL club midfielder Henrikh Mkhitaryan, who did not go to Baku to participate in Europa League final, Pashinyan reminded that a footage went viral on the net where the Azerbaijani police officers approached fans wearing Mkhitaryan’s shirt.

“Only imagine, fans appear in the focus of attention of Azerbaijani police only for wearing Mkhitaryan’s shirts. I think it speaks about everything”, he said, adding that there have been numerous cases when Russian citizens of Armenian origin have not been allowed to enter Azerbaijan.

‘It’s a very bad sign. I think such cases should be ruled out, since they cause more tensions. There is no such issue in Armenia. Recently, a reporter of Azerbaijani “Turan” news agency visited Armenia and I know that he had no troubles. No security issue was even raised”, Pashinyan emphasized,